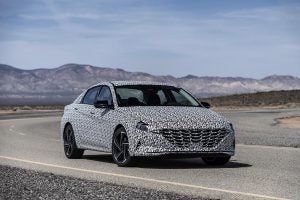 The 2021 Hyundai Elantra N Line will get some modest body and chassis tweaks and a new turbo engine.

Hyundai took great pains to give the all-new, 2021 Elantra more aggressive look and feel, starting with its “Sensuous Sportiness” design language. Now, the Korean carmaker is taking things a step further, giving us a first tease of the upcoming Elantra N line model.

“The upcoming Elantra N Line adds N brand specific design elements, chassis upgrades and a turbocharged engine to the recently revealed,” next-generation sedan, Hyundai said in a statement that was otherwise short on specifics. But we can help fill in at least a few of the gaps before the N edition is officially released later this year.

To start with, expect some immediately visible tweaks to the 2021 Hyundai Elantra N. That includes a dual exhaust, larger alloy wheels, a lowered suspension and some aerodynamic enhancements. But the most notably upgrade will be found under the hood.

(Hyundai goes online during the pandemic to reveal 2021 Elantra.)

Don’t be surprised, we’ve had it hinted, if the Elantra N gets the same 1.6-liter turbo-four gas engine found in the current Hyundai Veloster N. There, in U.S. trim, it punches out 201 horsepower and 195 pound-feet of torque. As for gearboxes, we could see Hyundai go with several options, including a dual clutch transmission and possibly even a row-your-own manual. That engine, in the Veloster, manages 0 to 60 times of around 6 seconds but might be a bit slower with the heavier Elantra. 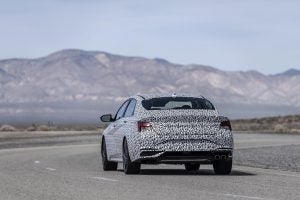 The N Line will join the regular gas Elantra and a first-ever Elantra Hybrid.

That compares with a 2.0-liter Atkinson Cycle Inline-four making 147 horsepower and 132 pound-feet of torque –paired to a continuously variable transmission – in the “base” Elantra.

Along with the stock gas version and the new N Line model, the 2021 Hyundai Elantra will be offered with a first-time hybrid package pairing a 1.6-liter naturally aspirated gas engine with a 32 kilowatt electric motor and a six-speed dual-clutch transmission. That package makes 139 hp and 195 lb-ft of torque.

We should point out that the Elantra teased here is the “N Line” model and that is a sort of middle-ground offering, much as we’re seeing from brands like BMW, which don’t take things up to full, peak levels of performance. The goal, Hyundai explained, is “to enable even more customers to experience the N feeling.”

What we already known about the “base” Elantra is that it grows 2.2 inches longer and has been widened by an inch, though it also sits about an inch lower, giving it a more sporty stance. 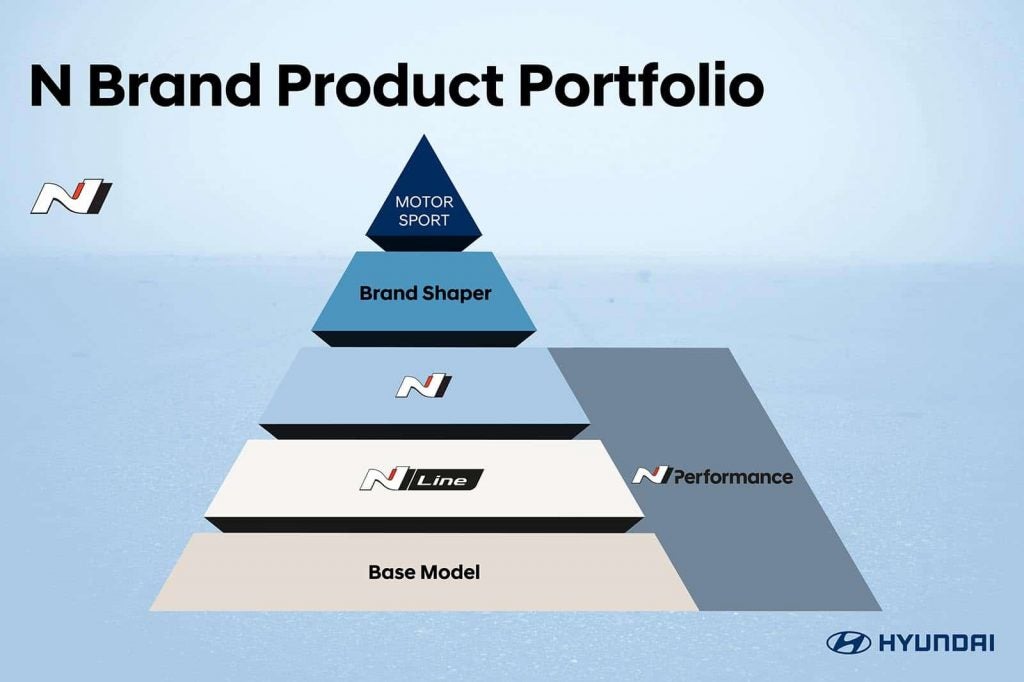 The use of the brand’s new “Sensuous Sportiness” design language translates into a lower nose, as well as a more ranked windshield and fastback roofline.

Inside, expect to see some “sporty” touches added to what is already a handsome enough interior. One of the features appears to be new paddle shifters on the steering wheel.

The Elantra, first revealed in mid-March during an online event, already has plenty of technology onboard,

The goal was to create “a dynamic disruptor of the compact sedan status quo,” said CJ Eckman, manager of connected car technology for the new Elantra, during the online unveiling. That includes starting the Hyundai Digital Key that can unlock and even start the Elantra from up to 90 feet away using a smartphone app. The Elantra gets the new, wireless version of both Android Auto and Apple CarPlay, as well as Qi wireless charging.

The 2021 Hyundai Elantra will be produced both in Korea and at the Hyundai assembly plant in Alabama. The automaker hasn’t said whether the N Line version will be limited to one plant or another, however.

Expect the Elantra N Line to go up against rival models like the Honda Civic Si and Volkswagen Jetta GLI, with that likely to mean a price tag somewhere above $26,000.