GM Ready to Ship First Round of New Emergency Ventilators

Automaker to send 600 units by end of April. 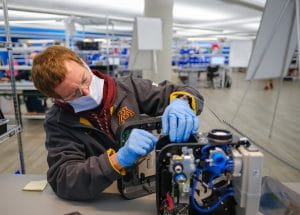 General Motors is moving quickly on its ventilator production, revealing Tuesday that its first models for the federal government contract are ready to be shipped.

The automaker secured a $489.4-million contract with the Trump administration to produce the much-needed medical devices in concert with Washington-based Ventec Life Systems. GM’s plant in Kokomo, Indiana, is putting out the V+Pro critical care ventilator.

GM will ship 600 ventilators by the end of the month and the full 30,000 in the contract by the end of August, according to the company. 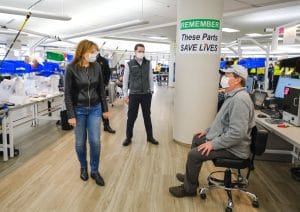 “Thousands of men and women at GM, Ventec, our suppliers and the Kokomo community have rallied to support their neighbors and the medical professionals on the front lines of this pandemic,” said GM Chairman and CEO Mary Barra. “Everyone wants to help turn the tide and save lives. It is inspiring and humbling to see the passion and commitment people have put into this work.”

GM isn’t the only automaker producing medical equipment to help in the battle against the coronavirus. Ford has two plants focused on manufacturing ventilators, respirators, face masks and isolation gowns. FCA has been making masks and Tesla donated thousands of ventilators it bought in China for California hospitals.

The automaker managed to move from idea to finished product quickly — a little less than month, despite criticism from President Donald Trump. The White House took note of the company’s efforts.

“GM has moved swiftly in Trump time to manufacture one of the most critical lifesaving devices in America’s war against the coronavirus,” said White House Assistant to the President Peter Navarro. “GM’s rapid mobilization of America’s manufacturing might in defense of our country is a proud salute to the ingenuity of its engineers, the true grit of its UAW workers on the line, and America’s doctors, nurses, and other healthcare professionals fighting for our lives at the front lines. 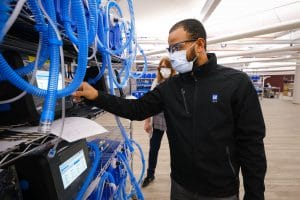 A UAW Local 292 worker checks on ventilators produced at the GM plant in Kokomo, Indiana.

“As these lifesaving ventilators roll off GM’s assembly line as fast as tanks once did in an earlier World War, they will be rapidly deployed to the hospitals of Gary, Chicago, and far beyond.”

In addition to team in up with Ventec, GM tapped its massive supplier base to help in the effort with everything to sourcing hundreds of parts and assemblies to the design of a new manufacturing process to the transformation of GM’s Kokomo factory.

More than 1,000 UAW Local 292 Kokomo-area workers volunteered to assemble the ventilators. They’re phasing in during the next few weeks as they learn to assemble the units as well as the new protocols in place to ensure the safety of all involved.