GM Increases Use of Renewable Energy 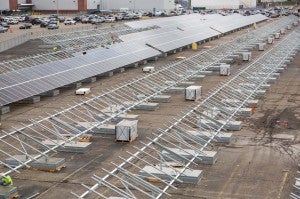 GM has a history of using renewable energy sources, such as this 800kW solar array at its Warren (Michigan) transmission plant.

General Motors and DTE Energy are teaming up to accelerate Michigan’s transition to renewable energy with a deal to source 500,000 megawatt hours of solar energy as part of DTE’s MIGreenPower program.

Because of cloudy skies and cold winters, Michigan has never been considered a state particularly promising for solar power and DTE, Michigan’s largest electric utility have relied on coal- and oil-fired plants to produce the electricity that have powered the state’s auto industry for more than a century.

The new deal follows an initial investment of 300,000 MWh of wind energy purchased by GM in February 2019, bringing the total amount to more than 800,000 MWh, or the amount of electricity consumed by more than 100,000 homes in an average year.

(GM’s use of wind power continues to grow.)

The deal was announced when the price of oil dropped to less than one dollar per barrel on the global oil markets, meaning producers had to spend money to store the oil produced by their wells for the first time in decades. 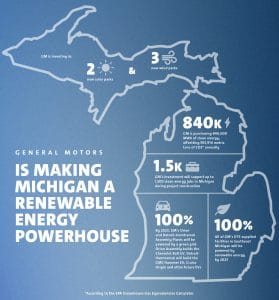 The negative prices, which are blamed on a huge drop in the consumption of gasoline and aviation fuel. However, the switch to renewable fuels signaled by the GM-DTE announcement also reflects the decline in oil’s market share used to produce electric power.

The MIGreenPower program is available to all DTE Electric customers who want to attribute a greater percentage of their energy use to DTE’s wind and solar energy operations.

By 2023, GM’s Orion and Detroit-Hamtramck Assembly Plants are expected to be powered by renewable energy. Orion Assembly builds the Chevrolet Bolt EV.

Detroit-Hamtramck will build the GMC Hummer EV, Cruise Origin and other future EVs. GM has also committed to expanding the availability of workplace charging stations at its facilities in Southeast Michigan, which will also be powered by wind and solar. 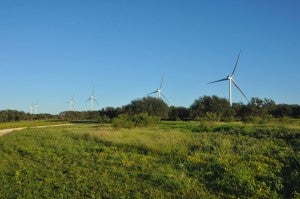 GM uses energy sourced from wind farms to meets 100% of the electricity demand of 16 GM sites and more than 10,000 GM and GM subsidiary employees.

“Projects like this can have a substantial impact on reducing emissions and we’re proud to lead the way in clean energy procurement in our home state,” said GM’s Chief Sustainability Officer Dane Parker.

“Not only should this agreement reduce emissions in the near term, it’s a glimpse into a world with electric vehicles, built by renewable energy, and in the case of our workplace chargers, charged by a green grid too. And as we scale our EV portfolio and access to a green grid around the world, the future looks brighter than ever,” he said.

This investment will fund two new DTE solar parks that are currently in development and will be among the largest in the state. GM’s initial MIGreenPower commitment was used to fund three wind parks scheduled to achieve commercial operation at the end of 2020. Based on similar projects, DTE expects this investment to support approximately 1,500 clean energy jobs in Michigan during project construction.