British study warns slump in demand could force dealers to close. Will that happen here? 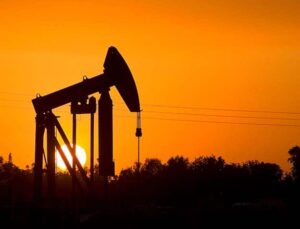 Global petroleum prices have fallen significantly in recent weeks, but a rebound in the price of Brent crude could put an end to the slide in prices at the pump.

Global petroleum prices plunged by more than half last month, with prices at the pump falling to levels not seen in years – but crude oil is showing an unexpected rebound, raising the prospect that the numbers could be ready to bottom out.

Brent crude, a global benchmark, was trading just under $27 a barrel early morning Thursday, a rise of more than 7% for the day, and has since risen to just over $29 a barrel in midday trading, an increase of 18% – though petroleum is still down about 60% from where it was trading at the beginning of the year.

In terms of what motorists pay at the pump, the U.S. average dipped below $2 a gallon over the weekend, according to both AAA and GasBuddy.com. There had been some speculation parts of the country could eventually dip below $1. But the sudden surge in crude raises new questions about such assumptions. That said, the ongoing slide in U.S. demand could offset any increase at the crude level, experts contend – while also raising the prospect that some service stations could be forced to close.

(National average for gas prices tumble below $2 a gallon.)

Two factors played into the spectacular crash of petroleum prices during the last five weeks, starting with a feud about production levels pitting two of the world’s largest oil producers, Russia and Saudi Arabia, against one another. 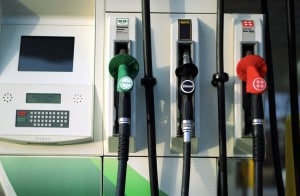 Gas prices fell as crude oil prices globally did so as well, but a surprise jump could halt the falling prices at the pump.

That led to a glut of supplies, neither of the two oil powerhouses willing to cut output even as global demand started to collapse in the wake of the worsening coronavirus pandemic.

Now, there are signs that the two foes may be starting to blink. Russian President Vladimir Putin on Wednesday suggested oil producers should be working to counter the global petroleum price slump. He indicated discussions are already underway. That will be one of the topics of a White House meeting today which will include the heads of some of the largest U.S. energy companies, including Chevron and ExxonMobil.

While some petro analysts are betting on diplomacy to pay off, others are skeptical the two sides will come to an agreement.

“I don’t think this meeting significantly changes things, the oil market is still way out of balance and oil stocks are still rising at an unprecedented rate,” Spencer Welch, director of oil markets at IHS Markit, told the Wall Street Journal. “Producers are going to have to involuntarily cut production because there’s going to be nowhere for the oil to go.”

The challenge for the oil industry is that demand has collapsed since the spat between Russia and Saudi Arabia began. So, even the sort of production cuts the Saudis sought in early March likely wouldn’t address the current situation. Demand for oil is down worldwide, gas sales in the key U.S. market off about 50% and still dropping, according to research by GasBuddy and others. 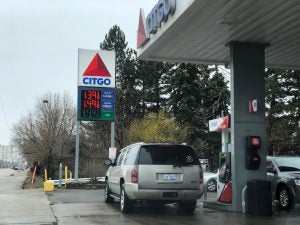 A Detroit gas station shows a price of just $1.39 a gallon – and there were lower prices at some nearby stations over the weekend.

It doesn’t help that Florida and Georgia have just enacted strict new social distancing rules. Close to 300 million Americans now are under shelter-in-place or other strict limits on their movement.

That has resulted in a collapse of prices at the pump, the average for unleaded regular in Oklahoma is down to $1.486 as of Friday morning, the lowest of any state. But 27 states now show averages of under $2, according to GasBuddy and some U.S. stations are now pumping at as little as $1.10 a gallon – one in Wautoma, Wisconsin this week charging just 87 cents and one in Cleveland at just 69 cents.

Were this week’s crude oil surge sustained, analysts say it could lead to a flattening out of pump prices – though there is such a surplus at the moment that it’s unclear when that would happen. Most likely, that would come as states like Michigan, California and New York begin to lift their lockdowns.

The glut of oil, along with the price collapse, has been putting immense pressure on everyone connected to the petroleum industry. While giants like ExxonMobil appear to have deep enough pockets to weather the situation, it’s a different story for smaller players, particularly independent well operators and distributors. 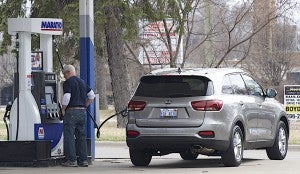 Gas prices are expected to remain low due to the impact of the coronavirus pandemic and discord between Russia and Saudi Arabia.

Add to that list service stations. They’re struggling to remain competitive by repeatedly slashing prices, some to levels where their profit margins vanish. It’s become a general truism that service stations now make most of their money selling beverages, snacks and lottery tickets, but even there, the shelter-in-place orders have deprived them of much of that business, as well.

What might happen to these mostly independent operators if things don’t get better soon? A new survey by the British government – which as ordered similar restrictions due to the pandemic – is not very upbeat.

It notes that “petrol” sales are down about 75%, on average. And the Petrol Retailers Association warned in a statement, “Many petrol stations will have to close in the coming weeks, as sales of fuel dry up and their businesses become unviable.”

Whether U.S. service stations could go under, as well, is uncertain, but they are clearly facing pressures similar to those of their British cohorts.