Operation could be up and running “as early as next week.” 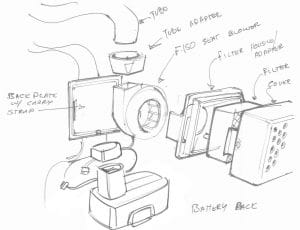 Ford is mobilizing a second plant to build powered respirators.

Days after announcing plans to start building desperately needed ventilators at a plant near its Dearborn, Michigan headquarters, TheDetroitBureau.com has confirmed Ford Motor Co. will convert a second factory to add production of powered respirators, as well.

While ventilators are used to help victims of the coronavirus who are having trouble breathing, the respirators Ford has develop will be used to reduce the risk of infection among medical personnel treating infected patients.

The goal is to have production begin quickly at a small parts plant in Flat Rock, Michigan, a southerm suburb of Detroit, confirmed Ford spokesman Mark Truby. “It could be as early as next week,” he told TheDetroitBureau.com. “They need them now, not in two months.”

On Monday, Ford confirmed it will begin producing ventilators later this month at a plant in Ypsilanti, Michigan as part of a joint effort with GE Healthcare. The automaker has already begun assisting GE in boosting its own production of ventilators at a factory in Madison, Wisconsin. 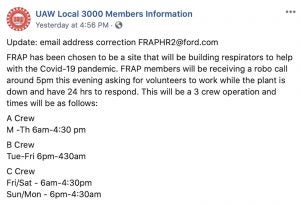 UAW Local 3000 used Facebook to inform its members about the move to build respirators at a plant in Flat Rock, Michigan.

Ventilators are used to assist patients having trouble breathing. That is a major problem with COVID-19, the disease caused by the coronavirus. The devices are in severely short supply due to the flood of cases, COVID-19 now expected to kill as many as 240,000 Americans before the pandemic is brought under control.

But there is a shortage of plenty of other medical devices, including masks for medical personnel, face shields, COVID-19 testing kits and respirators. The latter gear is used to reduce the risk that a doctor, nurse of clinician might become exposed to what is officially known as the SARS-CoV2 virus.

Ford has “MacGyvered a solution,” said spokesman Truby, referring to the TV detective who frequently got out of trouble by creatively putting together common objects. In this case, the “powered air purifying respirators” use some parts normally found on an automotive assembly line, such as a climate control fan from an F-Series pickup truck.

The precise number of respirators that the factory plans to build hasn’t been released but is expected to run into the thousands per week. Ford has already confirmed it plans to produce 50,000 ventilators at its Ypsilanti plant within the first 100 days it is in operation. It also is using 3D printing technology to roll out more than 100,000 face shields per week. 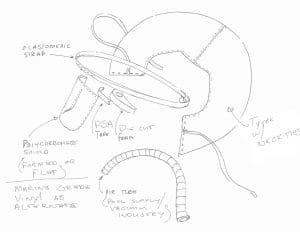 There is a design for a Ford-produced disposable respirator to be used by coronavirus first responders.

The automaker originally had planned to announce the conversion of a factory alongside its Flat Rock Assembly Plant later this week. But word began leaking out when United Auto Workers Local 3000 put out a robocall seeking paid volunteers to man the operation. It subsequently confirmed the factory “has been chosen to be a site that will be building respirators to help with the COVID-19 pandemic.”

How many workers might be needed to man the respirator line was not disclosed. Ford plans to bring in 500 hourly employees who have volunteered to work three shifts at the makeshift ventilator operation.

Ford is just one of the manufacturers converting some of its traditional automotive operations to assist in providing medical gear. General Motors has begun converting an electronics component plant in Kokomo, Indiana to assembly ventilators, while also assisting Seattle-based Ventec Life Solutions in boosting its own capacity. 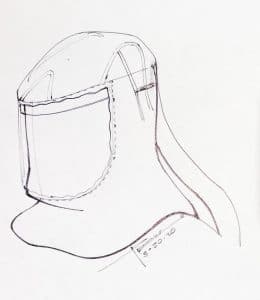 GM is producing face masks, as well, as is Fiat Chrysler.

Ford and GM first reached out to the White House to offer assistance in the battle against the coronavirus on March 18. They subsequently were hailed by President Donald Trump for their efforts. But, days later, as the president came under increasingly harsh criticism for the White House’s slow effort to address the pandemic, Trump suddenly leveled an attack on both automakers, especially GM CEO and Chairman Mary Barra. He then enacted the Defense Production Act ordering GM to assist in the effort.

That move was unnecessary, however. Trump again this last Sunday turned to praise both automakers while claiming GM had acted in deference to his emergency order. In fact, GM already had its production plans in place and was set to act without orders from the White House, according to timelines and documentation provided by company insiders.