Brand will be using four platforms. 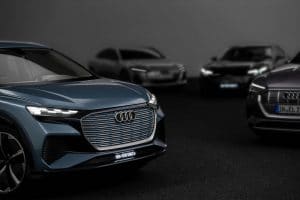 By 2025, the world will be awash in electric vehicles, if the production plans laid out by more than a dozen automakers remain unchanged.

The pronouncements by automakers leaves one to wonder: How will they do it? Just what kind of vehicles will we get in the U.S.? Some have promised to have as many as 30 vehicles on sale to the public in less than five years.

Audi’s trying to clarify a few things about its plans, which include having 30 electrified models on sale by 2025. An impressive 20 of those will be full battery-electric vehicles, which Audi claims is its “global commitment for a more electrified and sustainable future.”

In the U.S., Audi has introduced five production models: the Audi Q5 TFSI e, A7 TFSI e and A8 TFSI e plug-in hybrid electric vehicles (PHEV) as well as the e-tron all-electric SUV and upcoming e-tron Sportback. Coming soon are the Audi Q4 e-tron SUV and e-tron GT performance sedan, which have already been shown as concept vehicles. 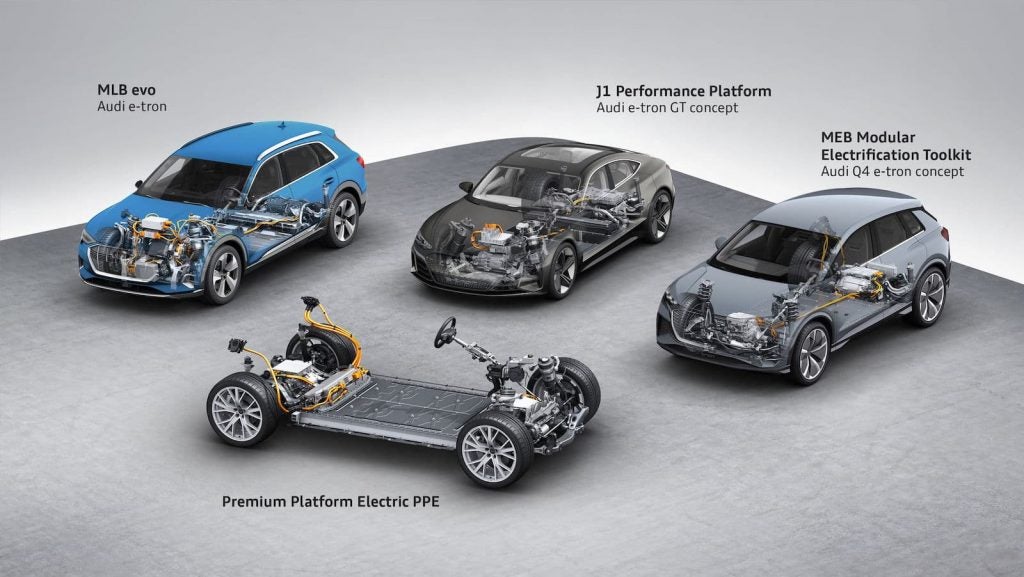 Audi is among the large cross section of automakers bringing new EVs to market by 2025.

In order to ensure it can meet the timeframe while offering a variety of vehicles, Audi’s using a tried-and-true method for building vehicles: platforms. In this case, four of them that the German premium brand claims “balance performance, efficiency, practicality and the engineering and craftsmanship synonymous with the Audi brand.”

The four architectures that will be the foundation for a slew of vehicles in multiple segments and capabilities starts with what’s already here — MLB evo, essentially the brand’s first electric vehicles.

Audi’s first EV carries the “e-tron” name, and is the start of the modular longitudinal platform, or MLB evo. The Audi e-tron SUV is the brand’s first all-electric SUV, and it went on sale in the U.S. last May. It offers new era technology, such as a sophisticated drive and recuperation system, with what people buying vehicles in the near-luxury segment expect from a ute: all-wheel drive and maximum comfort. 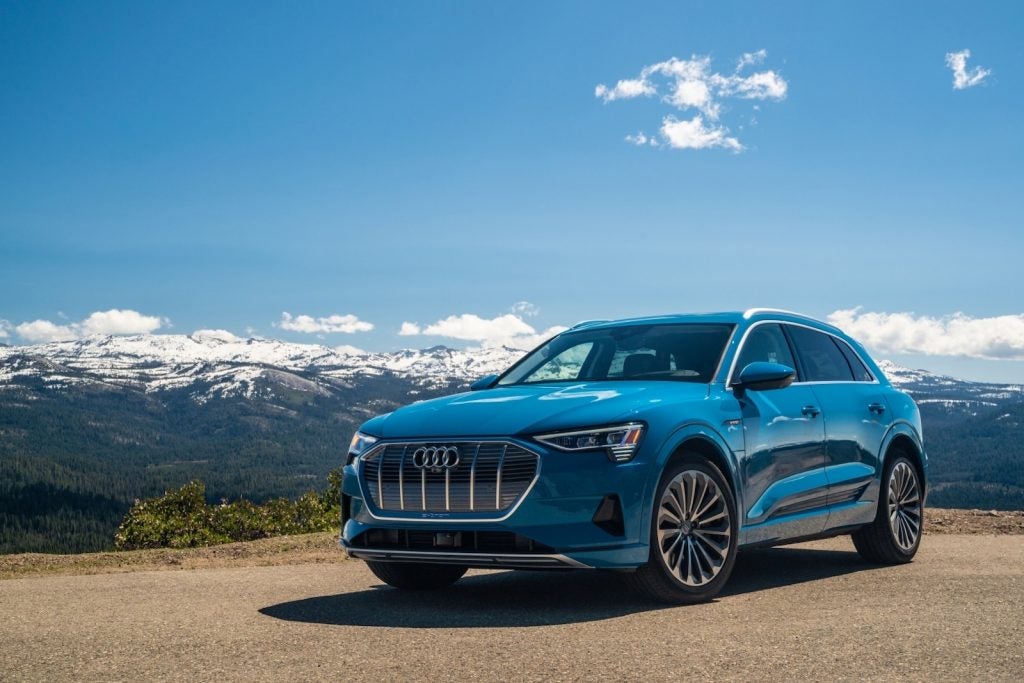 The Audi e-tron 55 quattro is already available in the U.S.

The platform underpins an array of Audi vehicles. In the case of the e-tron SUV, it has a wheelbase that is 115.3 inches long, putting it squarely between the Audi Q5 and Audi Q7 SUVs. In addition to high-voltage battery stores up to 95 kWh of energy and can recover up to 30% of energy used to drive the vehicle during regenerative braking applications, the e-tron houses two asynchronous electric motors (ASM) that produce up to 402 horsepower in boost mode.

A more powerful, three-motor variant with fully independent rear torque vectoring is also under development. Additionally, the Audi e-tron can charge using both alternating (Level 1 and 2) and direct (Level 3) current and can achieve approximately 80% charge in 30 minutes at a 150 kW high-speed public charger. Later in 2020, the e-tron will be joined by the e-tron Sportback, a new variant with a coupe-like profile.

The next platform is the J1, which is a performance electric platform developed with its sibling, Porsche brand. The Audi e-tron GT performance sedan concept is the first vehicle produced using the J1 platform. 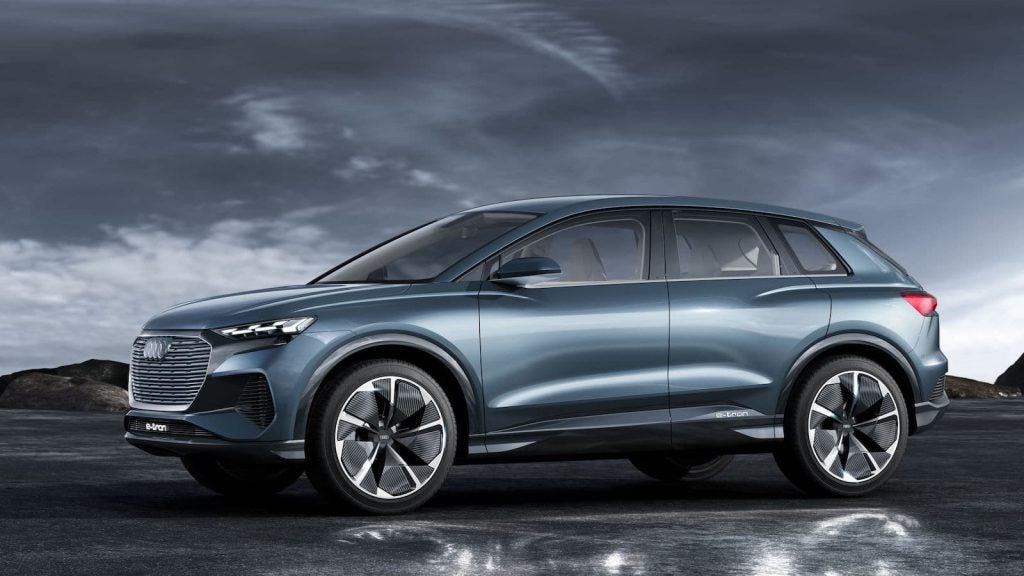 While specifications for the e-tron GT are subject to change, the e-tron GT concept is estimated to reach 62 mph from standstill in 3.5 seconds and 124 mph in just over 12 seconds in production form. The e-tron GT is an evolution from current EVs as the electrical system at 800 volts. Most current EVs currently operate at a capacity of 400 volts or less, allowing the battery to charge to 80% in about 20 minutes at a Level 3 DC fast charger with a maximum output of 350 kW.

Additionally, the batteries are located under the floor of the GT concept, lowering the center of gravity and improving its performance and handling capabilities.

Being part of the Volkswagen family has its privileges, including getting access to its next platform, MEB, which is short for modular electric toolkit architecture. The MEB architecture will be used for smaller Audi’s like the Q4 utility vehicle. 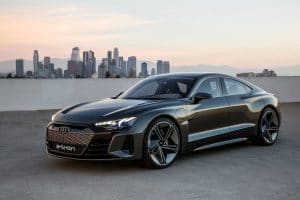 The Audi e-tron GT concept car is equipped with two permanently excited synchronous motors that produce a combined 582 horsepower and 612 lb-ft of torque.

The last platform that is part of Audi’s foundation for this influx of electric vehicles is the Premium Platform Electric architecture, or PPE. Also developed with Porsche, it’s high tech and highly scalable, the automaker notes, and offers some flexibility.

It allows for low- and high-floor, from the medium-size class and up — SUVs, Sportbacks, Avants and crossovers. The portfolio and flexibility will allow Audi to develop and sell one of the best combinations of electric, plug-in and internal combustion vehicles in the global markets.

The technology offered in PPE is similar to that of MEB and with a number of powertrain and battery options that will be available. Standard packaging will allow for one electric motor in the rear; the higher-range models will be equipped with a second electric motor at the front axle (PSM or ASM) that can activate quattro all-wheel drive automatically when needed.