But automakers are already ramping up production of ventilators, masks and respirators.

President Donald Trump chastised GM and Ford in a tweet, pushing them to produce ventilators faster.

The auto industry has been a frequent target for President Donald Trump and the nation’s two largest automakers came in for a lashing on Friday as he appeared to try to shift blame for the administration’s slow response to the coronavirus pandemic.

In a tweet, the president wrote, “General Motors MUST immediately open their stupidly abandoned Lordstown plant in Ohio, or some other plant, and START MAKING VENTILATORS, NOW!!!!!! FORD, GET GOING ON VENTILATORS, FAST!!!!!!”

Hospitals across the country are reporting a critical shortage of ventilators and other medical gear, such as masks, respirators and COVID-19 testing kits. Numerous medical experts and others have faulted the White House for ignoring early warnings and failing to step up the production and acquisition of supplies, even as reports of coronavirus infections began escalating. In recent days, several private businesses, including a number of automakers, have stepped in to try to fill the gap.

That has happened even as the president continued to avoid using the authority he has under the Defense Production Act to force manufacturers to switch to providing materials critical to the nation’s protection during a crisis.

The assault on both Ford and GM came despite the fact that both companies actually have moved quickly to deal with medical shortages. The two separately advised the White House on March 18 that they wanted to assist and shortly afterwards said they would target devices like masks and ventilators.

On March 20, GM announced it was teaming up with Ventec Life Systems, a Bothell, Washington manufacturer to help it ramp up its own production of ventilators. GM said it would also gear up to use space at an electronic components plant in Kokomo, Indiana to add ventilator production of its own.

The automaker has been working with suppliers this week to come up with the necessary parts to boost ventilator production.

In a response to the president’s Friday morning tweet, GM issued a statement noting that “FDA-cleared ventilators (are) scheduled to ship as soon as next month. This effort is in addition to Ventec taking aggressive steps to ramp up production at their manufacturing facility in Bothell, Washington.” 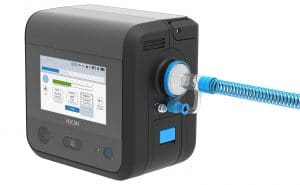 Separately, GM’s statement added that it “will also begin manufacturing FDA-cleared Level 1 surgical masks at its Warren, Michigan manufacturing facility. Production will begin next week and within two weeks ramp up to 50,000 masks per day, with the potential to increase to 100,000 per day.”

The UAW weighed in about GM’s rush to produce ventilators as well.

“We are happy to work with GM during this pandemic for the health and safety and good of our Nation as we collaborate towards the production of ventilators,” the UAW said in statement. “The UAW has a proud history of stepping up in times of national emergency. General Motors should be commended for stepping up at a crucial moment in our history. At the UAW we are – all in – to find ways to partner together to flatten this curve and save lives.”

Ford has not yet responded to a request for comment on the president’s tweet. But the automaker earlier this week announced it has lined up two separate partners and will work with 3M to produce face shields while also partnering with GE Healthcare to increase production of ventilators.

The first step will be to help GE boost its own production capacity, but Ford engineers have devised a simplified version of that company’s ventilators which will be assembled at Ford’s advanced manufacturing center near its Dearborn, Michigan headquarters.

Ford is also producing masks and delivered its first batch to a local Detroit hospital earlier this week.

Separately, Fiat Chrysler is ramping up production of masks at its own facilities. And Tesla has moved to acquire ventilators from China which it will ship to the U.S. The EV manufacturer also has donated to California hospitals thousands of masks diverted from its own factories.

In the Trump tweet, meanwhile, the president raised the prospect of having GM use the old plant in Lordstown, Ohio, it shuttered early in 2019. That factory was sold last autumn.