Limited edition takes sports sedan up a big notch – but gives up back seat. 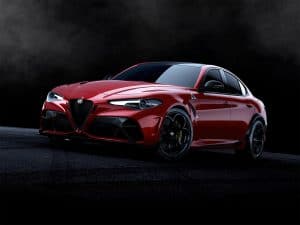 Grand Touring Lightened, or so GTA translates into. It doesn’t hurt to add more power, as well.

Strip out the back seat, add racing harnesses and boost the output of your already formidable twin-turbo V-6 by 35 horsepower and, in the case of Alfa Romeo, you come up with the Giulia GTA.

Originally scheduled to make its debut at the now-cancelled Geneva International Auto Show tomorrow, the Italian automaker is instead giving us a look at the sportiest version of the Giulia it has yet offered. For those not familiar with the GTA badge, it’s short for Gran Turismo Alleggerita – or “Grand Touring Lightened” — and, following its first use back in 1965, appeared on some of the most formidable products Alfa produced post war.

Only 500 of the street legal Giulia GTA sedans will be built and, for the moment, they’ll have limited distribution. But a spokesman noted that, “While most of these units will be allocated to Europe, we are evaluating opportunities to introduce the GTA in other key markets around the world, including the U.S.”

(The Geneva Motor Show was expected to bring out some major intros. Here are some of the most significant.) 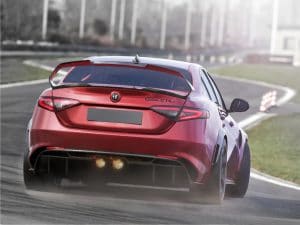 The GTA is about 220 pounds lighter than the Giulia Quadrifoglio , but gets another 35 hp.

There are actually two versions of the new edition: the Giulia GTA and track-ready GTAm.

The Alfa Romeo Giulia is already an impressive sports sedan, especially in Quadrifoglio trim which punches out 505 horsepower from its 2.9-liter bi-turbo V-6. The Giulia GTA and GTAm both punch that up to 540 hp, “thanks to meticulous calibration work performed by Alfa Romeo engineers,” the automaker said in its news release, leaving us guessing as to what specific work was done. The only detail on the powertrain is the use of a new Akropovi exhaust system.

As the GTA name signifies, however, the key work done on the limited-edition Giulia focuses on slashing mass, the sedan losing a total of 220 pounds compared to the Giulia Quadrifoglio. There’s extensive use of carbon fiber, starting with the sedan’s hood, roof, front bumper, front wheels arches and fenders, as well as the driveshaft. And, of course, the development team got some help by tossing out the rear seat. The ultra-light polycarbonate Lexan, normally found in race cars, replaces the GTA’s side windows.

(Alfa has already upgraded other versions of the Giulia, as well as the Stelvio SUV.) 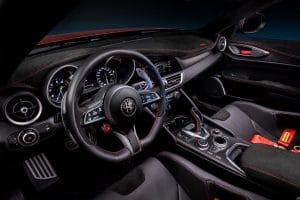 The Giulia GTA sedan is no stripped-down track car. It offers plenty of Alcantara along with its 6-point racing harness, the GTAm adding a rollbar.

All told, the special edition Giulia manages a best-in-class power-to-weight ratio of just 6.2 pounds per horsepower.

Another important move was to improve the Giulia GTA’s aerodynamics. That includes an active front splitter, a massive rear wing and rear diffuser, as well as other revisions developed with the help of Sauber Engineering.

Inside, the GTA gets touches like Alcantar trim on much of the cabin. The GTAm version, with its back bench removed adds carbon fiber and other details, as well as places to store helmets and a fire extinguisher.

While the Alfa Romeo Giulia GTA may be ready for the track, with its two racing seats, rollbar and six-point safety harnesses, it remains street legal, something that would be a real plus for weekend race warriors with access to one of the club tracks popping up all over.

That’s in line with the original GTA motto: “A victory a day in your everyday car.”

The Italian automaker has yet to announced pricing and on-sale timing for the Giulia GTA.