Reservations for Mach-E Reach into Every State

All-wheel drive and 300-mile range give it wide appeal. 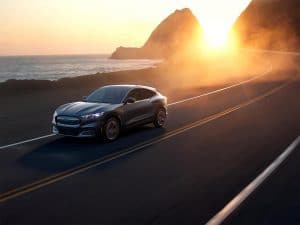 Ford says 80% of the reservations for the Mustang Mach-E specify long-range battery packs.

Until now sales of electric vehicles have been fenced in or left out of markets in various parts of the United States.

But Ford Motor Co. says the all-electric Mustang Mach-E has drawn reservations from all 50 U.S. states during the first three months of the reservation period. Ford said reservations have come from the sunny Pacific to the icy coasts of New England thanks in part to key vehicle attributes like EPA-estimated range and all-wheel drive capability that meet the demands a variety of climates.

“Since revealing the Mustang Mach-E last November, we have seen a high level of interest from customers around the world,” said Mark Kaufman, Ford’s Global Director of Electric Vehicle Marketing & Distribution.

“We designed the Mustang Mach-E with the aim to deliver an electric, guilt-free, performance SUV while providing peace of mind through our strong dealership network. Our strategy is working. With reservations from coast to coast in the US, we look forward to growing our reservations and delivering this SUV in late 2020.” 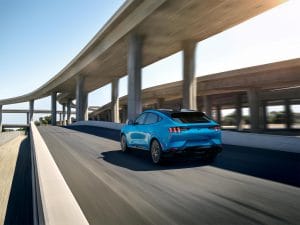 About 75% of reservations call for all-wheel-drive versions, that jumps to more than 90% in some New England states.

A Mustang Mach-E with available extended-range battery and rear-wheel drive has a targeted EPA-estimated 300 miles of range, eliminating concerns about range anxiety. It is especially a favorite among customers in the west and southwest. California, Nevada, Colorado, Arizona and Washington are particularly strong.

On the other side of the country, available all-wheel drive is proving popular with customers in the frigid and snowy northeast, Kaufman said.

(New Mustang Mach-E is just the first step in “electrification” for Ford.)

While nearly three in four customers reserving a Mustang Mach-E have so far opted for an all-wheel drive model, in states like Connecticut, Maine, Massachusetts and New Hampshire, that number climbs to more than 9 in 10. 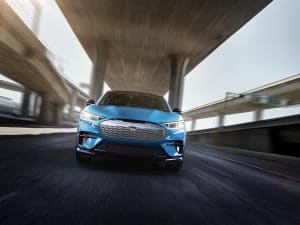 The Mustang Mach-E GT also remains popular with customers across the country, and approximately 30% of all Mach-E reservations are for the GT.

Also contributing to the early nationwide success is the availability of the FordPass Charging Network, North America’s largest public charging network, with more than 12,500 places to charge, including fast-charging sites.

The Mustang Mach-E GT also remains popular with customers across the country, and approximately 30% of all Mach-E reservations are for the GT – remaining steady when compared to the last update in late December, when it was announced that reservations for the limited edition First Edition are full.