Hyundai Offers a “Prophecy” for its Future With Sleek Show Car

All electric concept vehicle signals plans for 44 electrified vehicles by 2025. 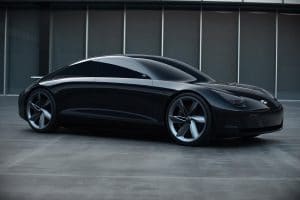 The Hyundai Prophecy Concept was to have debuted at the Geneva Motor Show.

Hide the badge and you’d be unlikely to guess that the jet black concept car comes from Hyundai. Appropriately dubbed Prophecy, the show car is meant to provide insight into the direction the Korean carmaker will be heading in the coming years.

But it’s not just the use of the new “Sensuous Sportiness” design language that makes the Hyundai Prophecy a crystal ball on wheels. During a livestream news conference, Hyundai officials noted that the battery-powered concept vehicle will be followed by 44 electrified vehicles by mid-decade.

“Hyundai has always been an audacious and progressive brand, from the very first days,” Luc Donckerwolke, Chief Design Officer at Hyundai Motor Group, said during the livestream which was pulled together after the cancellation of the Geneva Motor Show where Prophecy was scheduled to debut. “Today we will show how (Prophecy) translates into reality.”

(Live(streamed) from Geneva! Catch all the debuts originally scheduled for the now-cancelled Geneva Motor Show.) 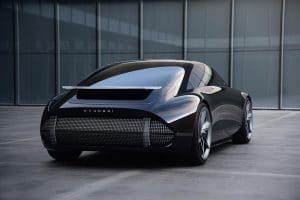 The all-electric concept is meant to signal where Hyundai is going from a design and an electrification perspective.

“We will offer the broadest range of electrified powertrains in the industry,” responded Thomas Schemera, the head of the product division for the group, which includes not only the Hyundai brand but Kia and Genesis, as well.

Whether Hyundai actually will offer more vehicles than any competitors is debatable, Volkswagen planning to about 50 all-electric models by mid-decade throughout its extensive range of brands. But with plans to invest about $56 billion in electrification by mid-decade, there is little question that Hyundai doesn’t plan to sit on the sidelines.

The sleek silhouette of the Prophecy – which comes across as a Taycan-like sports car, pushes Hyundai into a new design direction. The look is clean and relatively subtle, with the hood sweeping upward from a low, grille-less nose, then flowing across a coupe-like roof into a boat-tail rear – accented by hidden vertical taillamps. Creases flow from the front fender to back wheel arch, while the inset rocker panels emphasize a coke-bottle curve to the Prophecy’s silhouette. 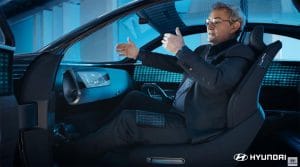 Prophecy could operate autonomously, though drivers could take over using either of two joysticks to steer.

It’s inside the cabin, however, that one finds some of the more intriguing elements of the Prophecy design. The concept is designed to operate autonomously. But, should a driver wish to take manual control, it features two joysticks, rather than a steering wheel, one in the center console, the other on the door trim. Steering is handled by pivoting either joystick left or right, but “drivers have access to a wide variety of (additional vehicle) functions,” Hyundai said in a statement, “which can be selected via the joysticks’ integrated buttons. Ultimately, this human-machine interface enhances passenger safety.”

Fittingly, the Hyundai Prophecy also makes use of sustainable materials for its cabin and lighting and material colors intended to enhance a sense of calm. A “Clean Air Technology” system filters out pollutants, meanwhile.

With no chance to get up close and personal with Prophecy, thanks to the cancellation of the Geneva show, it’s difficult to get a clear sense of size and shape. It appears, however, that Donckerwolke and his team wanted to maintain a sense of classic sports car proportions even while reaching into the future. 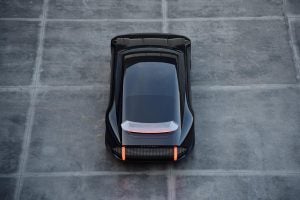 The Hyundai Motor Group plans to have 44 electrified vehicles in production by mid-decade.

The challenge was to bury the batteries and electric drive system below the load floor and then recapture some of the space freed up from the traditional passenger compartment, repurposing it for passengers and cargo. In the video presentation the Prophecy appeared to have a much roomier cabin than might otherwise be expected when glancing at the exterior.

We’ll expect to see the Prophecy Concept make a public debut in the not-too-distant future, perhaps at the New York International Auto Show in April – if that event doesn’t get scrubbed, as well, in response to the coronavirus epidemic.

Longer-term, it seems likely that some of the exterior design details will start showing up on future Hyundai Motor Group products, as well the underlying electric drivetrain. As for the joysticks? That is likely to remain a feature found in videogames, at least for now. But once full autonomous drive technology finally comes to market, all bets are off.