Goodyear reCharge Concept Would Let You Renew, Rather than Replace, Worn Tires 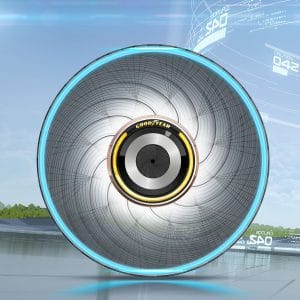 Goodyear’s reCharge Concept uses capsules of a silk-like liquid to regenerate its tread.

Blow-outs. flats and worn-out treads are an unpleasant fact of life for a motorist, but those problems could disappear if a concept Goodyear is working on proves viable.

For one thing, the reCharge concept is airless, meaning it can’t go flat or blow out if punctured. Even more significant, the prototype is renewable. Each tire – at least in the concept form – is loaded with capsules containing a liquid that, over time, regenerates the tread, allowing it to continue running long after a conventional tire would have to be scrapped. And the liquid inside those capsules is entirely biodegradable, unlike the rubber compounds used today.

“Goodyear wants the tire to be an even more powerful contributor to answering consumers’ specific mobility needs, said Mike Rytokoski, Vice-President and Chief Marketing Officer, Goodyear Europe, “It was with that ambition that we set out to create a concept tire primed for the future of personalized and convenient electric mobility.”

(New airless tires could soon be in production.)

Originally scheduled to debut at the now-cancelled Geneva International Auto Show, the Goodyear reCharge concept is likely years away from reality, but some elements of its design could wind up in production in the not-too-distant future.

Goodyear is, in fact, just one of several manufacturers working on airless tire designs. Last June, its arch-rival Michelin announced a partnership with General Motors to test its own non-pneumatic design, the Uptis, which could lead to production in the coming year.

There are still a variety of challenges, but airless tires would effectively eliminate the common problem of flats and blow-outs. 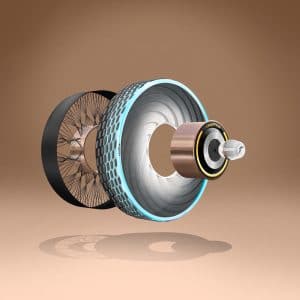 A cutaway view of the Goodyear reCharge Concept.

(Digital tires, video IPs and flying cars. Check out some of the cutting-edge auto tech at the 2020 Consumer Electronics Show.)

That’s only one of the ways in which tomorrow’s tires could change radically in the next few years. At the Consumer Electronics Show in Las Vegas two months ago, Bridgestone revealed a digital sensor built into a tire that can automatically detect wear and alert a driver. The system, it claims, will become particularly important once driverless vehicles take to the road in large numbers.

The Goodyear reCharge Concept would minimize the risk of worn treads, however.

The capsules slotted inside the prototype tire use a biological material similar to spider silk, a material stronger than steel. It is also biodegradable. Over time, the liquid would flow out and regenerate the tread of each tire.

It also would allow the tire to adapt over time, Goodyear claims, “to climatic circumstances, road conditions, or simply how you want to travel. Thanks to artificial intelligence a driver profile would be created around which the liquid compound would be customized, generating a compound blend tailored to each individual.”

The tire manufacturer has not set out a timetable for getting the reCharge concept into production, but it noted that it is working on a variety of projects meant to address problems like blow-outs, while also helping to improve tire efficiency, something particular useful for helping electric vehicles maximize range.

(The Geneva Motor Show is back on – sort of.)