GM’s market share is expected to rise for the first quarter of 2020 despite the decline in sales.

This story has been updated with additional information.

The quick decline of new vehicle sales in March has unexpected silver lining for two of the Detroit Three automakers: a jump in market share for the first quarter.

Edmunds.com analysts believe that March auto sales will be down 35.5% from the year-ago period due to the coronavirus pandemic, and a 23.4% drop compared with last month. However, it appears foreign automakers, especially Nissan, appear to be the hardest hit.

“The first two months of the year started off at a healthy sales pace, but the market took a dramatic turn in mid-March as more cities and states began to implement stay-at-home policies due to the coronavirus crisis, and consumers understandably shifted their focus to other things,” said Jessica Caldwell, Edmunds’ executive director of insights.

“The whole world is turned upside down right now, and the auto industry is unfortunately not immune to the wide-ranging economic impacts of this unprecedented pandemic.”

Part of this is because automaker’s may not be overly inclined to roll out big incentives to try to draw buyers into showrooms right now — many states have restricted movement of its citizenry to just essential trips, such as going to the grocery store. However, the analysts believe that will change as the COVID-19 crisis continues to evolve.

“Automakers can count on capturing some deferred demand once we get past the worst of this pandemic, but since they’ll be competing with so many other companies for consumer spending at that point, they’re really going to need to create incentives to spur some sales,” said Caldwell.

“Things might look a bit bleak as automakers are taking a hit right now across the board, but the massive stimulus package deal that was just announced is an encouraging update. History has shown us that this industry can survive through almost any financial or natural disaster, and we’re confident that they’re going to come out of this tough period on the other side.” 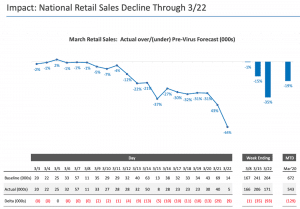 J.D. Power PIN Network, which gets real-time data from dealers as they complete their sales transactions, shows that the sales decline began slowly at the beginning of the month, but then accelerated March 20. Sales were down 31% for that day, but then as several states implemented more stringent orders, such as shelter in place, daily sales dropped 64% on March 22.

Smoke believes the recovery will be “shaped like a V or a U” with a steep and quick decline, followed by a similar but opposite recovery in the U.S. due to pent-up demand. However, the global outlooks is much different, according to IHS Markit analysts.

The global auto industry is expected to witness an unprecedented and almost instant stalling of demand in 2020, with global auto sales forecast to plummet more than 12% from 2019, to 78.8 million units, according to the latest IHS Markit forecasts.

This represents a downgrade of 10 million units compared with pre-coronavirus forecasts in January 2020. A fall of 12% for 2020 would be considerably worse than the two-year peak-to-trough decline of 8.0% during the global recession in 2008/2009.

Ford saw its market share fall slightly during the first quarter of the year.

Globally, the picture looks different: a sharp reduction in near-term growth followed by a slow recovery. Risks are heavily skewed to downside; especially how low the market could go and for assessing recovery prospects, IHS notes.

Market prospects are mixed, with emerging glimmers of hope for China, though vulnerable to the risk that the virus flares up in the coming months. Government action is key to both controlling the virus and providing support and stimulus packages to help economies through the healing process.