An appealing package delivering better performance, as well as up to 13 additional miles per gallon. 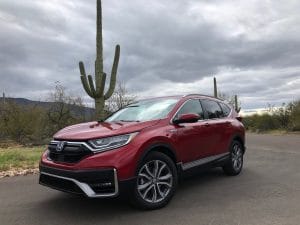 The 2020 Honda CR-V Hybrid offers styling and performance as well as a hybrid powertrain.

The harsh sun normally bathing the cactus-covered sands of Tucson have vanished, a leaden sky threatening to burst open as we fire up the new 2020 Honda CR-V Hybrid and head out for a day’s drive through the scrub brush – and the housing developments pushing ever further out into the Sonoran Desert.

Since it was first launched 23 years ago, the CR-V has become not only a mainstay of the Honda line-up but also one of the best-selling vehicles in the U.S. market overall. With CUVs and SUVs rapidly moving up the charts, in fact, it ranked fifth overall last year, just behind the Toyota RAV4 with which it is invariably compared.

Indeed, like the RAV4, the 2020 Honda CR-V brings to market an important new option, its first hybrid drive package. And based on both the specs and our day behind the wheel, it’s a package a lot of potential buyers are likely to consider. That even includes folks who aren’t all that worried about fuel economy because the latest Honda hybrid not only delivers solid mileage but also turns out to be the fastest and most powerful version of the CR-V line-up.

(Honda kills off the Clarity EV.)

Honda has a justifiable reputation for offering green, high-mileage products. It actually beat Toyota to market with the country’s first gas-electric hybrid, the original, two-seat Insight. Today, the CR-V will join other HEVs including the Accord and Insight. But it definitely marks a shift in strategy. 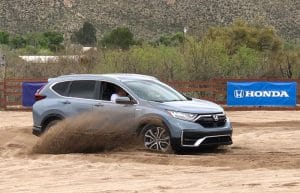 Run into some sand? No problem in the CR-V Hybrid, just flip to the “sand” setting.

“Everybody wants better fuel economy, but they don’t want to give up other things,” like performance, roominess and road manners, said Honda’s Jimmy Jenkins, as we set out on the road.

The CR-V Hybrid pairs a 2.0-liter inline four with two electric motors which skip the CVT route Honda has used elsewhere. Here, the powertrain delivers torque through a four-speed gearbox. And there is plenty of torque, 232 pound-feet, to be precise, as well as 232 horsepower. By comparison, the conventional, gas-powered CR-V delivers 190 hp and 179 lb-ft from its 1.5-liter I-4.

Power, in turn, is delivered to all four wheels, all-wheel-drive being standard with the Hybrid package. The Toyota RAV-4 Hybrid likewise comes with AWD technology, but the system is significantly different in layout, with the front axle motivated by its gas engine and an electric motor. A second motor powers the back axle, coming on only when needed and operating only at lower than highway speeds.

We’d have loved a serious off-road opportunity to test out the CR-V Hybrid but had to settle for a slightly less extreme demonstration that let us drive by the gas-electric model and conventional CR-V through a sand pit. We then put the RAV4 to the same challenge. Of the three packages, the CR-V Hybrid clearly seemed most within its comfort zone, the gas-electric drivetrain, with its lock-up clutch, readily shifting torque precisely where needed without bogging down. 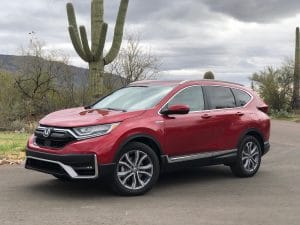 The new CR-V hybrid performs on road and off, including a very responsive drivetrain.

On public roads, the CR-V Hybrid was equally impressive. With the fixed-gear transmission there was none of the rubber-band effect that so many hybrids suffer from. The drivetrain was responsive and, as billed, clearly quicker than the all-gas crossover.

In terms of handling and steering, there’s virtually no difference between the two packages, the CR-V being a competent road car with a bit of sportiness to its overall feel.

In terms of noise levels, the Hybrid package is notably more quiet, especially when it briefly runs in electric mode. That said, it can get noisy when you push the throttle to the floor. At low speeds, meanwhile, you’ll hear a subtle, gurgle-like hum. That’s not the electric motors but the newly requisite warning sound that vehicles from the 2020 model-year forward will have to produce when in pure battery mode to warn pedestrians. 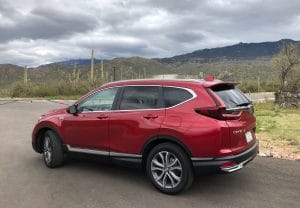 The CR-V Hybrid has room for five as well as plenty of cargo room, including fold-flat seats.

In terms of mileage, the 2020 Honda CR-V Hybrid is rated at 40 City, 35 Highway and 38 Combined – HEVs are typically most efficient in stop-and-go traffic. On the road, we actually got slightly better numbers than the Munroney sticker would suggest. By comparison, the gas CR-V is rated at 27/33/29. As for the RAV4 Hybrid, it manages an EPA rated 41/38/40.

There are three driving modes, including one meant to boost the CR-V Hybrid’s mileage by driving all-electric where possible. Range in pure EV mode, however, is limited to a mile or so.

The Hybrid also replaces the regular CR-V’s paddle shifters with regen paddles that can raise or lower the aggressiveness of the hybrid system as you come off the throttle. It is somewhat like downshifting while braking and increases how much energy goes back into the battery pack.

Visually, there’s not much difference between gas and hybrid versions of the CR-V. The gas-electric model gets five-LED foglights, a revised front bumper, a chromed rear wing, a rear bumper with hidden exhaust and the blue badging used on all Honda hybrid models.

Inside, the use of an advanced, 1.4-kilowatt-hour lithium-ion battery means there’s no loss of passenger or cargo space. The split back-row seats still fold flat. Honda likes to point out the CR-V has about three more inches of rear legroom than the RAV4. 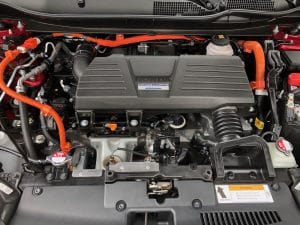 The CR-V hybrid powertrain puts out 232 horsepower and 232 pound-feet of torque.

touchscreen for the infotainment system. There are plenty of the requisite USB ports, of course. And the crossover gets standard Honda Sensing, the automaker’s smart safety technology package. That includes features like forward collision warning with automatic brake intervention, lane keeping assist, active cruise control and more.

Considering you can get into the base 2020 Honda CR-V Hybrid LX package for just $27,750, it’s a surprisingly affordable option. That is the “stripper” model only 10% of Hybrid models are expected to opt for. The next step up, the EX, will set you back $30,260 before options, and our Touring Edition jumps to $35,950 – all these prices minus $1,120 in shipping fees.

Considering what you get for the money, starting with better performance on top of 13 miles per gallon more in the city, we think a lot of potential buyers will give serious consideration to the 2020 Honda CR-V Hybrid – as they should.