Move mirrors made by competitors.

FCA CEO Mike Manley is taking a 50% pay cut while salaried employees are getting a 20% reduction.

FCA said salaried employees around will take temporary 20% pay cuts as the automaker looks to save money and avoid layoffs amid disruption from the COVID-19 outbreak.

The compensation reduction starting April 1, could last up to three months, FCA said.

(Pressure on automakers rises as shutdown gets extended.) 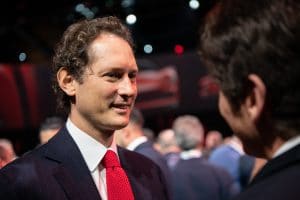 FCA Chairman John Elkann and the rest of the board of directors have given up their 2020 compensation.

Just like at GM and Ford, FCA is planning repay its employees the deferred compensation no later than March 15, 2021, according to a letter from CEO Mike Manley. Unlike at Ford and GM, however, the repayments do not include interest.

In addition, Manley is taking a 50% cut in his salary for the same period. The automaker’s 20-member Group Executive Council is forfeiting 30% of their pay. And FCA Chairman John Elkann, the heir to Agnelli family, which controls the company, and the board of directors have agreed to forgo their remaining 2020 compensation.

“As the pandemic has spread, we have prioritized creating a safe and healthy workplace but also worked to safeguard the jobs of permanent FCA employees,” Manley said.

“As we go through this period, we continue to plan for the time we emerge from this crisis and in order to do so, we are taking numerous steps to protect our company during this time. We are both reinforcing our access to capital and being laser focused on every project, program and expense — removing and postponing non-critical activities,” he said.

Fiat Chrysler will pay back the 20% pay cut of its salaried employees by March 2021.

Carmakers around the world are facing a mammoth cash squeeze as sales plummet as the coronavirus pandemic continues to grow in some countries.

FCA assembly plants in North America and Europe are now idle and the company, suspended work on a new plant in Detroit and last week cut jobs being done by 2,000 contractors.

Sales figures due out this week are expected to show a dramatic decline and the drop in sales during April is expected to be even more dramatic as social distancing measure in the United States and across Europe cripple the sale of new vehicles.