Only 88 copies will be made. 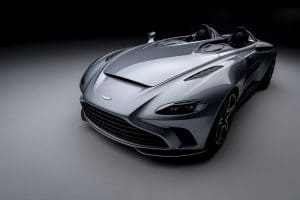 Aston Martin’s V12 Speedster harkens back to another era. Then maker will produce just 88 of them.

There’s a clear sense of retro … make that “heritage” … to the new Aston Martin V12 Speedster, the limited-edition two-seater the British marque unveiled at its headquarters in the UK today.

The latest in a series of core products and special editions, the open-top two-seater is designed to provide “raw driving thrills,” the automaker suggested chief engineer Matt Becker, “with agility and poise backed by abundant power from Aston Martin’s twin-turbo 5.2-liter V12. Driving doesn’t get any purer than this.

Priced at $950,000, Aston plans to produce just 88 copies of the hand-built V12 Speedster, with the order bank now open and deliveries expected to start during the first quarter of 2021.

“With the V12 Speedster, we do go back a step,” said Miles Nurnberger, director of Design, Aston Martin Lagonda “There’s clear lineage from the 1959 Le Mans winning DBR1 to our Centenary celebratory CC100 Speedster Concept in 2013. There is also a bit of 1953 DB3S in the mid-section, so it really is our latest incarnation of the Speedster concept. It’s also inspired by fighter jets as much as it is by our history.” 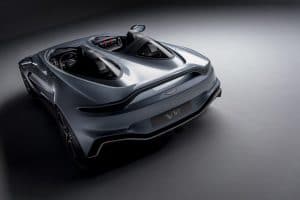 The project was conceived just 12 months ago and was turned over to Aston’s Q Division, the group tasked to developing the automaker’s most lavish, exclusive and extreme projects – such as the DBX by Q that was, like the V12 Speedster originally scheduled to debut at the now cancelled Geneva International Auto Show.

Like other products in the line-up, the Speedster is based on a bonded aluminum architecture and borrows bits from both the Vantage and DBS Superleggera models.

It features an independent double wishbone front suspension and a multi-link rear with coil springs and a driver-adjustable adaptive damping system.

(007 will be getting new SUV as Aston Martin unveils new DBX.)

To allow a driver to push to the limit, there are 21-inch forged center-lock alloy wheels and large carbon ceramic brakes, front and back.

Power comes from a 5.2-liter twin-turbo V-12 that can hit 700 horsepower and 555 pound-feet of torque. The front mid-mounted, quad-cam engine is paired with an eight-speed ZF automatic gearbox, with a limited-slip differential driving the rear axle. The Speedster will hit 60 mph in about 3.4 seconds, and top out at 186 mph. 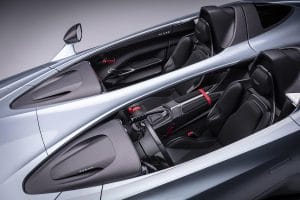 The Speedster is powered by a 5.2-liter twin turbo V8 putting out 700 horsepower.

“No roof or screen, a big engine, low, with broad shoulders and exaggerated and emotional styling with twin humps and the spine separating the driver and passenger,” said Nurnberger. “The light, low, rear end contrasts with the bold, enlarged grille, unique headlights and bonnet nostril at the front. The bonnet nostril we haven’t done in a very long time, but we’ve brought them back. It’s a neat trick visually to allow us to win some space for the V12. It creates this iconic looking vent.”

The hood appears to flow right through the passenger compartment, neatly cleaving the Speedster’s open cabin into separate driver and passenger compartments. And here, Aston mixes tradition with modern elements, including saddle leather, chrome, aluminum, carbon fiber and even 3D-printed rubber. In a nod to the past, there’s a removable leather bag instead of a glove box.

Along with the V12 Speedster and the special edition of Aston’s new DBX SUV, the Q division has created several other intriguing special editions. Appropriately for a group named for the legendary R&D chief in the 007 film series, that includes a truly retro remake of the classic Aston Martin DB5 outfitted with all the weaponry it has carried over the year for super-spy James Bond.