BMW Plugs Back In With Long-Delayed i4 Concept

Production version will be one of three new EVs coming by next year. 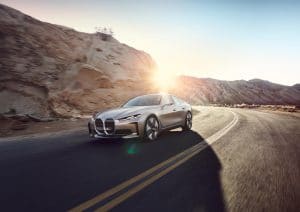 The production version of the i4 Concept will reach the U.S. next year.

Once considered a pioneer in the emerging EV market, BMW has lost traction in recent years. It hasn’t release an all-new offering through its electrified BMW i brand since mid-decade, but the long drought is finally about to come to an end.

The Bavarian automaker is set to roll out three new, all-electric models by the end of 2021, starting with the iX3, its first battery-electric SUV, and following with both the iNext and the i4.

The latter model, its first BEV in the midsize premium sedan segment, was set to debut in concept form at this year’s Geneva Motor Show. With that event cancelled due to the worsening coronavirus epidemic, BMW instead revealed it early Tuesday during a video webcast.

(Live -streamed- from Geneva! The show takes to the Web.) 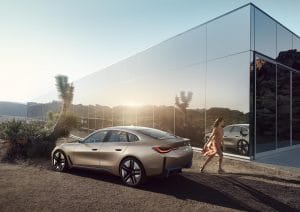 The single electric motor in the i4 Concept produces 530 hp, the equivalent of a traditional V-8.

“The BMW Concept i4 brings electrification to the core of the BMW brand,” proclaimed Adrian van Hooydonk, Senior Vice President BMW Group Design. “The design is dynamic, clean and elegant. In short: a perfect BMW that happens to be zero emission.”

The i4 is significant in a variety of ways. For one thing, it marks a move into the mainstream for BMW’s all-electric offerings. The original i3 was a compact, all-electric city car, the i8 a high-cost plug-in hybrid sports car. The i4 is, at its heart, an electrified 4-series Gran Coupe.

The fifth-generation drivetrain relies on a single electric motor capable of producing up to 530 horsepower, enough to launch the concept version of the i4 from 0 to 100 kmh (or 62 mph) in just 4.0 seconds, with a top speed of 124 mph. 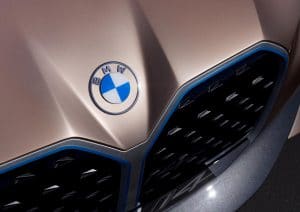 Expect the i4 Concept’s nose to be a source of some real controversy.

The 80 kilowatt-hour lithium-ion battery pack, meanwhile, is rated at 600 kilometers per charge, or 370 miles, using the European WLTP test cycle. In the U.S., that will translate into an EPA range of around 270 miles.

While the i4 Concept bears a strong similarity to a 4-Series Gran Coupe, there are some distinctive features that differentiate it from conventional gas- and diesel-powered models. There’s the oversized, albeit blanked out, double-kidney grille, for one thing, a look that is clearly going to create some controversy. Other elements, such as the large air curtain intakes on either side of the grille, are meant to improve aerodynamics – with an EV something that plays a critical role in maximizing range.

The i4 Concept gets a fastback roofline and the long wheelbase translates into a larger interior than you might expect of a vehicle of its size. With no engine up front – the electric drivetrain mounted below the load floor — some of that space could be repurposed for the passenger compartment. 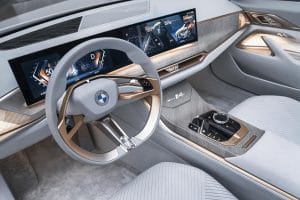 With the drivetrain moved under the floor, BMW freed up space for a larger than expected cabin.

The cabin, says BMW, is an example of “innovation meet(ing) minimalism.” The driver-focused cockpit is underscored by the use of a curved display that combined both a digital instrument panel with a large infotainment screen.

“Almost all operating functions are integrated into the display as part of an overall approach centered on reducing the number of haptic controls to the minimum,” the automaker said in a statement. “Even the climate control system now works by touch control.”

The screens change dramatically, depending upon which “experience,” or mode, the driver chooses, including “Efficient,” “Core,” and “Sport.” Each mode not only translates into a different look on the LCD screens but also creates a different interior sound which, the company said, was “developed under the brand name of BMW IconicSounds Electric by world renowned composer Hans Zimmer together with BMW Sound Designer Renzo Vitale.”

While the next all-electric BMW will be the iX3, that model is not planned to reach the U.S. market, so the production version of the i3 will be the first of the brand’s new offerings earmarked for the States. Production is set to begin sometime next year at BMW’s plant in Munich, BMW investing $223 million to tool up the factory for the project. The i4 will reach American dealerships before the end of 2021.

Tagged with: BMW | Geneva Motor Show | bmw i4 | bmw i4 concept | coronavirus
Thanks for subscribing! Please check your email for further instructions.