Automakers Rein in and Even Ban Travel as Coronavirus Epidemic Spreads

NY Auto Show to go ahead, but organizers watching developments. 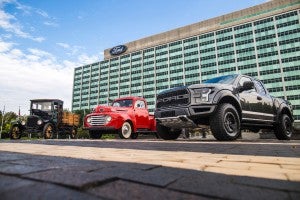 Ford has clamped down on employee travel in the wake of the coronavirus outbreak.

Ford Motor Co. has all but banned employee travel, both international and domestic, as concerns about the spreading coronavirus outbreak escalates.

And the second-largest Detroit-based automaker isn’t alone. Every automotive manufacturer reached by TheDetroitBureau.com has already implemented some form of travel cutback, if not outright restriction. Some, like Ford, say only under the most narrow of conditions will employees be permitted to travel. Others, such as Mercedes-Benz, are focusing on travel to countries, notably China, South Korea, Japan and Italy, where authorities are struggling to contain the viral attack.

The travel restrictions come as the Geneva Motor Show was forced to cancel its annual exhibition for the first time in its 90-year history. And while the industry’s next big gathering, the New York International Auto Show, remains on track to open next month, organizers say they are also closely watching the situation.

Ford has “banned nonessential travel through March 27th,” the automaker’s communications chief Mark Truby texted TheDetroitBureau.com, adding that Ford will permit only “business critical travel,” such as for several upcoming vehicle launch programs it has scheduled. 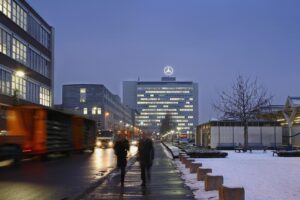 Mercedes-Benz has implemented a less stringent restriction on travel, allowing only “essential” travel.

Ford enacted what appears to be one of the most restrictive travel policies among automotive manufacturers, though many have yet to spell out policies or respond to queries.

All of the companies that did respond indicated they are taking steps to limit or outright bar travel to countries where the coronavirus epidemic might currently be considered out of control. That includes China – especially the region around Hubei, the epicenter of the disease – Japan, South Korea and Italy.

Mercedes-Benz has put restrictions on those countries. Otherwise, it is simply advising U.S. employees, “as of this juncture … to be careful,” said lead spokesman Rob Moran. “But that could change,” he quickly added, noting that management is set to review policies Wednesday morning.

Industry giant Toyota is allowing “only essential travel,” said senior spokesman Scott Vazin. “It is not banned, but you need a very compelling reason to go (and should use) good judgement.” Vazin said the automaker is working with health authorities in the U.S. and abroad and “we (could) see a change in status” of its travel policy if conditions worsen – or improve.

Fiat Chrysler Automobiles has one of its global headquarters in northern Italy, site of a major coronavirus outbreak. Anyone in that region may face Italian and local government restrictions already. As for employees, overall, “We have requested that all travel be pre-approved by a member of our leadership team, including both domestic and international trips, and that travel be prioritized to essential needs only,” FCA said in a statement.

Worldwide, numerous conventions, sporting events and other public gatherings have been cancelled or delayed. And that includes automotive events like the annual Geneva International Auto Show which was called off due to temporary restrictions enacted by the Swiss government. The event was set to open up with a two-day media preview on Tuesday, with the public portion of the show to run through March 15.

The Beijing Motor Show was to have opened on April 21, with its media preview followed by public days running through April 30. That show, one of the industry’s biggest gatherings in the world’s largest automotive market, has been indefinitely postponed.

Meanwhile, attention is now focused on the New York International Auto Show. It is scheduled to start with a forum of industry leaders on April 7, followed by a two-day media event. The public days are on the calendar from April 9–19. 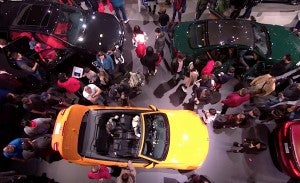 New York hosts the next international auto show, which takes place starting April 7. The show is planning to carry on, business as usual — for now.

“With five weeks to go,” NYIAS announced in a Tuesday statement, “organizers are moving forward with plans to open the Show as scheduled. We are in communication with state and local officials and the Jacob K. Javits Convention Center, and, at this point, there are no plans to cancel any shows at the facility due to coronavirus.”

The statement added that the convention center and the auto show “are taking precautionary measures …to limit the spread of respiratory viruses,” such as putting out 70 new hand-sanitizing stations.

Whether the show will go on or call things off like Geneva did could very well depend upon what happens with the epidemic over the next several weeks, said observers within the auto industry. And it may not be up to show organizers. Even before the Swiss government moved to ban the Geneva Motor Show from opening, a number of manufacturers raised questions about whether they would send employees to the event. Automakers are asking themselves similar questions about New York.

What would happen if you gave a show and nobody came? That’s a question NYIAS officials may be facing.