“Boost mode” will yield nearly 500 hp – albeit for a maximum 8 seconds. 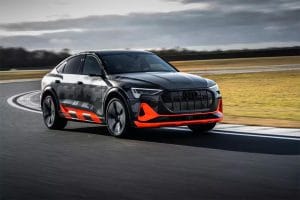 With its third motor, the e-tron and Sportback models will be able to produce up to 450 hp.

As automakers prepare to roll out scores of new battery-electric vehicles over the next several years they’re coming to recognize that, for many potential buyers, performance matters as much as range and cost.

Borrowing a page from the Tesla playbook, Audi is getting ready to roll out a sportier version of its all-electric SUV, the e-tron S, as well as the e-tron Sportback coming to market later this year. The new models will get a third electric motor and see their power increase by as much as 40% using an electric boost mode.

The e-tron S and e-tron Sportback S models will now be able to hit 60 mph in just 4.3 seconds, Audi claims, with an electronically limited top speed of 130 mph. 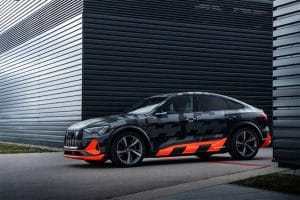 The S models move the big motor from the original e-tron up front, adding two smaller motors in the rear.

The original version of the e-tron launched last year featured two electric motors, a large one in the rear and a smaller one up front. The S models flip that layout. They will have the larger motor, making 163 horsepower, will drive the front axle. Two of the smaller motors, together producing 266 hp, are mounted in back, one for each wheel.

“The drive has been programmed for efficiency in everyday life; in normal driving mode, only the rear electric motors work,” Audi explained in a statement. “The front drive is unpowered but switches itself on – with the driver barely noticing – if the driver needs more power.”

All told, the package can produce a combined 429 horsepower with all three motors kicking in, up from 350 hp with the original, two-motor e-tron. When the driver needs a real boost, however, the e-tron S models can deliver an eight-second “boost mode,” bumping things up to 496 hp. 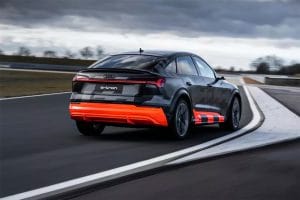 The added power helps a driver with an S model cut more than a full second off the launch times of a standard e-tron. What Audi did not yet reveal is what the impact will be on range, however.

Since the big motor up front normally doesn’t operate except under high demand, it is unclear what the impact will be based on standard testing models. The battery pack appears to remain the same, at 95 kilowatt-hours. That yields what has been generally perceived as a disappointing 204 miles per charge, according to the EPA, with the original e-tron.

As for charging, the pack will still be able to plug into newer, 150 kilowatt quick chargers capable of getting a drained battery back up to 80% of capacity in just 30 minutes, Audi claimed. 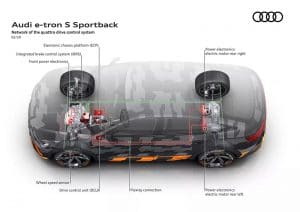 Visually, there will be some noticeable tweaks to the Audi e-tron S and e-tron Sportback S models. They will feature wheel arches each widened by 0.9 inches.

Among other modifications, the automaker said in its statement, “The front and rear bumpers are heavily contoured, while the diffuser insert runs almost the full width of the vehicle. The bumper is flanked by bigger and more expressive air curtains, which improve air flow. They extend below the headlights, thereby creating a dynamic appearance even from a distance.” Inside updates include an optional leather sports seat.

Audi did not say when the new S models will roll out, pricing likely not to be revealed until closer to launch.

(Audi not the only automaker worried about battery shortages.)