Audi A3 Sportback Gets a Makeover for 2021

New model gets freshening for next model year. 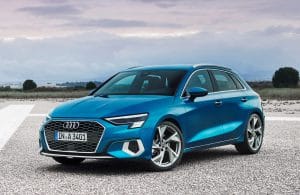 Audi’s new A3 Sportback gets an update for 2021, enhancing its athletic look.

Many of the Geneva-based debuts have centered on performance vehicles or battery-electric options, but Audi’s introduction is a bit more mainstream: the 2021 A3 Sportback.

The new A3 Sportback gets a makeover designed to keep its compact proportions, but also a sporty look that plays into the do-it-all nature of Sportback models. That feeling is accentuated by large air inlets on the front end as well as the A3’s wide body.

That athletic theme carries on as one moves further along where the Sportback’s shoulder enhances a long, smooth line from front to back while the area below that curves in, emphasizing the car’s wheel arches — an intentional aesthetic introduced by the automaker’s design team. 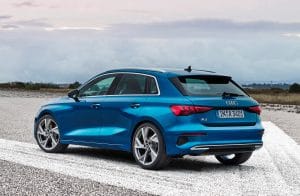 The A3 Sportback comes with three engine choices and can be mated to one of two transmissions.

The digital daytime running lights of the Matrix LED headlights are a further innovation. They consist of a pixel array made up of LED segments in a three by five arrangement that create special light signatures and make the A3 immediately recognizable, Audi notes.

The sporty, athletic look is carried over into the Sportback’s interior where aluminum and carbon inlays convey a premium feel found most-often in performance vehicles. However, this is not some heartless, unfeeling beast – or company, for that matter – as the seat upholstery is made of recycled PET bottles for the first time.

Looking sporty is one thing, but Audi offers three engine choices to let owners decide how much “sport” they need. There is a gasoline-powered 1.5-liter turbocharged inline 4 cylinder as well as a hybrid version and a diesel-powered 2.0-liter turbocharged inline-4 putting out as much as 150 hp. The 1.5-liter models will put out 150 horsepower as well. Hard numbers for U.S. models will be available closer to the time they cross the Atlantic.

Transmission options will include 6-speed manual and 7-speed dual-clutch units. Also, there 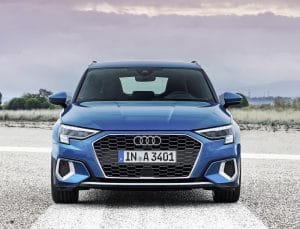 The Sportback comes with a slew of safety technologies.

The engines at start of production will be combined with front-wheel drive and be mated to either a six-speed manual transmission or the seven-speed S tronic, which the selector lever of which is now designed as a compact shifter.

Audi notes the driver can push and pull this to control the basic functions of the automatic transmission. Shortly after market launch, Audi will be gradually expanding the offer to include further engine versions, including electrified drive systems and versions with quattro drive. 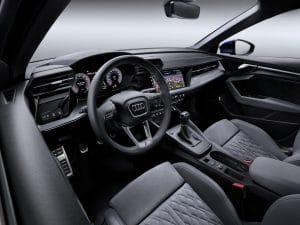 The new A3 Sportback has a leather interior with aluminum and carbon accents.

The new model, unsurprisingly, comes equipped with a slew of safety technologies, including Audi’s pre sense front, swerve assist and lane departure warning. Additionally, other tech lane change and exit warnings as well as the cross-traffic and park assist systems are available as an option. The adaptive cruise assist, which maintains the speed and distance to the vehicle in front and assists with lane guidance is also available.

On the inside, the A3 Sportback offers more space and functionality combined with compact external dimensions. It’s a slightly larger vehicle this time around allowing for plenty of passenger and cargo room. In fact, depending on the position of the rear bench seat, the luggage compartment holds between 13.4 cubic feet and 42.4 cu. ft., and the loading floor can be inserted at different heights. An electric tailgate, which can also be controlled with the wiggle of a foot, is available.

Presales of the new Audi A3 Sportback start in many European countries in March 2020, with the first vehicles to be delivered to customers at the beginning of May, with arrival in the U.S. expected in early to mid-autumn. Pricing wasn’t made available.