Science Group Calls for Ride-Hailing Companies to Switch to EVs 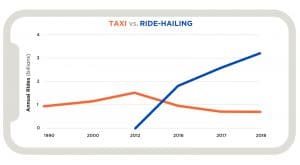 The Union of Concerned Scientists is calling for ride-hailing services to switch to electric vehicles.

The popularity of ride-hailing services isn’t just hurting other forms of transportation like taxis or buses, but it’s also creating more pollution in the process, prompting a call for those groups to move to zero-emissions vehicles.

According to a new report from the Union of Concerned Scientists, these services – like Uber and Lyft – increase carbon emissions. The report reveals that these services have a negative impact while other studies have shown the services contribute to growing inner-city congestion as fewer people take public transportation and no decrease in private car ownership, Reuters reported.

“While it’s tempting to think of ride-hailing services as a climate-friendly option, our analysis shows that ride-hailing trips today are about 69% more polluting than the types of trips they are replacing,” to group said. 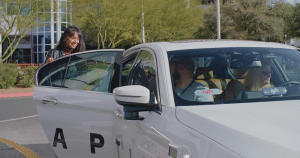 A passenger gets into one of Lyft’s autonomous prototypes.

The study shows that a solo ride-haling trip creates 50% more carbon dioxide that one person driving their private car. A pooled ride-hailing trip, during which multiple passengers share one car, emits nearly the same amount as a private car ride, according to the study.

On a daily basis, Uber completes nearly 14 million trips. While in 2018, Lyft completed 1 billion rides. Both numbers are on the rise so the impact of ride-hailing services is also escalating.

Currently only 15% of all U.S. ride-hailing trips are shared, the researchers found. The group conducted its research in seven U.S. cities. With the results in, the UCS is calling on Uber, Lyft and other services to convert their vehicles from gasoline-powered to electric-powered cars.

Some of the finding may run contrary to one’s instincts. For example, many of the vehicles used for rise hailing are newer, offering significant improvements over older privately owned vehicles. However, those advantages are muted by deadheading, the practice of driving around waiting for the next rider, which many drivers do and accounts for 42% of their time, according to the study. 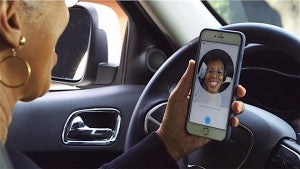 In addition to shifting toward EVs in large numbers, the group also encouraged to increase the share of pooled rides and improve connections to public transit hubs. The study also showed ride-hailing emits 70% more emissions than if those riders used a bush, train or a bike.

Uber and Lyft have defended themselves in the past, claiming many of the figures are overstated, especially the urban congestion numbers. They have suggested that most of the traffic caused in cities is attributable to privately owned vehicles as well as commercial vehicles.