Return of the Thing? VW Ruggdzz Expected to be a Blast From the Past

Boxy utility vehicle could make its retro-futuristic return by 2023. 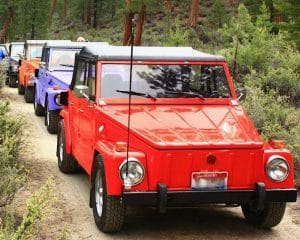 Volkswagen’s iconic Thing may be making a comeback as electric vehicle.

As Volkswagen moves into its increasingly electrified future it has shown a fondness for mining its past. We’ve already seen examples like the ID Buzz, a modern-day, all-electric take on the classic Microbus, as well as the ID Dune e-buggy. Now, it appears, the German automaker will soon reveal a battery-powered take on one of its most quirky icons, the Thing.

We’ve been hearing such rumors for more than a year and Britain’s Autocar now says it has solid intel that there not only will be a concept version but also a production model heading to showrooms by 2023.

If that report is accurate, the new model will be dubbed the ID Ruggdzz, joining a list of double-zz electric vehicles that also includes not only the ID Buzz but also ID Crozz and ID Vizzion. It’s apparently a German thing. Or, in this case, Thing.

(VW wants to make its cars part of the Internet of Things with new joint venture.)

For those who don’t quite recall what that was, the vehicle known internally as the Type 181 was a four-door convertible that looked like a corrugated sardine can on wheels. It had a number of features you still find on the Jeep Wrangler, such as removable doors and a fold-down windshield. Oddly, however, VW never bothered to give it four-wheel-drive, limiting the vehicle’s appeal to those who otherwise might have taken it trail and rock crawling. 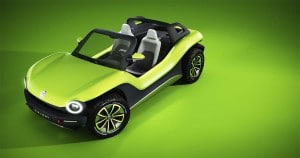 The new I.D. Buggy concept is powered by a single electric motor on the car’s rear axle.

Known to the public by a variety of names, including Kurierwagen in Germany, Trekker in the UK, Safari in Mexico, and the Thing in the U.S., the Type 181 (and left-hand-drive Type 182) were produced from 1968 to 1983, though VW sold barely 90,000 of them worldwide.

But it remains something of a brand icon and a number of surviving models have been getting converted for electric drive in recent years.

That seems to fit part of the strategy VW is developing for its battery drive program which is expected to see at least 50 all-electric models on the market by 2025 – and substantially more by the end of the decade.

According to Autocar, the automaker is not only focusing on what it hopes will become high-volume models — such as the ID.3 hatchback in Europe and the ID.4 coming to the U.S. – but also “a line of ID models with the same timeless and classless qualities as the original Beetle.”

The ID Buzz concept was the first example, with VW following it last April with the ID Buggy. The German automaker has confirmed production plans for the electric Microbus which will be assembled at its big Mexican factory. It has yet to say whether a production dune buggy will make it to showrooms, as well, but it was clearly upbeat during the concept’s rollout at the 2019 New York International Auto Show.

The production version of the VW ID Buzz is “on track” for a 2022 launch, according to VW officials.

(It might have good reason to follow up with a production model. During the heyday, as many as 250,000 of the original Beetles were modified into dune buggies.)

Like ID Buzz and ID Buggy, it appears the ID Ruggdzz design is similarly retro-futuristic. Autocar claims to have spoken to a source familiar with a preliminary version of the Thing reborn, describing it as having “a distinctly boxy profile,” and “a bluff front end.” Whether it would retain its corrugated-style panels is unclear, but I certainly seems to be trying to revive the overall feel of the original.

The rectangular headlights would be a definite throwback touch, but the Ruggdzz also is reported going to get a C-pillar that will look to outside viewers as if it were translucent.

As with the Microbus, a production ID Ruggdzz would have to undergo some significant engineering work to come to market today. The original utility vehicle really wasn’t much more than a four-person tin can. There was decidedly little in the way of crash protection, for one thing. That simply wouldn’t fly today.

Whether it would retain the relatively long hood remains to be seen. That space could be devoted to crash protection – and a frunk – of course. But, as with the other BEVs Volkswagen is developing, almost all of the drive technology, notably including motors and batteries, would be mounted in the skateboard-like MEB platform. Referred to by VW as a “modular electric toolkit,” it underpins the vast majority of upcoming battery-cars, starting with the D.3. 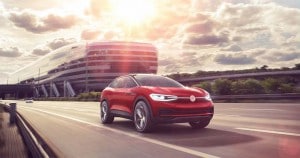 The British report claims a five-seater would measure about 181 inches nose-to-tail, or roughly 14 inches shorter than the ID Buzz. A longer seven-seater may also be in the works, a good bet for the American market.

The flexibility of the MEB platform would be put to good use with dual electric motors apparently providing the all-wheel-drive function the original Thing sorely needed. There’s even some indication an “extreme model” may be in the works, sporting many of the trail-rated touches you can order on today’s Jeep Wrangler, such as roof-mounted lights and skid plates.

Few folks would be surprised to see VW reveal the ID Ruggedzz in concept form in the not-too-distant future. Whether it will, indeed, follow up with a production model, seems likely, as well.