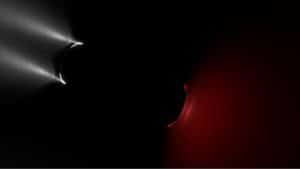 Polestar is teasing its new concept, Precept, that it will show just ahead of the Geneva Motor Show.

Volvo’s Polestar electric performance unit has been using the Geneva Motor Show as its launching pad for new vehicles, and this year apparently won’t be any different as it will debut its new Precept concept just ahead of the event.

The brand plans to show off its new vehicle on Feb. 25, at an event just for the new Android-based HMI concept, according to AutoCar magazine. The brand even released a teaser that doesn’t reveal much in the way of new information.

The image is an overhead view with the Precept’s headlights and taillights, which appear to borrow from design of the Polestar 2. The idea behind the concept is to reveal what’s coming down the road, after Polestar 1 and 2. 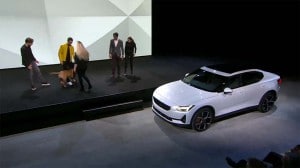 The Polestar 2, the brand’s first fully battery-electric vehicle, made its debut in Geneva.

Polestar officials aren’t much help, at least not on its website, offering only: “Precept: a rule intended to inform behavior or thought. In other words, a way of declaring how you mean to proceed. Starting as you mean to go on. Stating your intentions up top. A manifesto. It’s also the name for something that takes all of our ambitions and combines them.”

Autocar suggests that the brand will still offer a surprise at the show as well, with an early look at a Polestar 3. It’s certainly possible since the company has already confirmed there will be a “3” in the future.

“In the future, Polestar 3 will join the portfolio as a fully electric performance SUV,” and an exterior concept shown at the same time as the new HMI would demonstrate the integration of Polestar’s interior technical ideas with evolved exterior design.

With the whole world seemingly shifting toward sport-utes and crossovers, the Polestar 3 is likely to be an all-electric crossover, borrowing Polestar 2’s underpinnings, including a version of the dual-motor electric powertrain that puts out 402 horsepower and offers a range of 275 miles that comes with the Compact Modular Architecture. 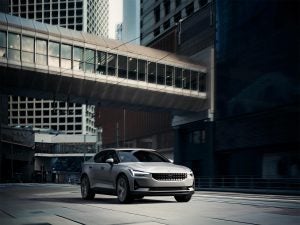 Volvo kicked off its electric performance unit with the Polestar 1.

Recently, Polestar revealed it will “evolve the user experience” in its future vehicles through further collaboration with Google. Polestar 2 is the first vehicle on the market powered by Android with the Google Assistant, Google Maps and the Google Play Store built-in. Today, the Swedish electric performance car brand looks even further into the future

“We already showed the world we take digital integration in our cars seriously and are open to collaborate with experts in these fields,” says Thomas Ingenlath, Polestar CEO. “Now we continue that story, sharing a vision that is even more in tune with the preferences of our individual customers. Building on the Android infotainment system in Polestar 2, our future systems will make life in our cars easier, safer and more fun.”