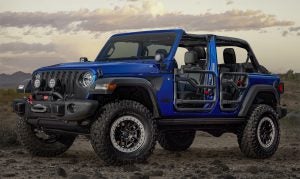 Mopar offers more than 200 Jeep Performance Parts, like the tubular doors on the JPP20.

Starting in the second quarter, legions of Jeep Wrangler fans will have the chance to order and customize a version of the Wrangler using an array of parts designed specifically for off-road adventure – the JPP20.

The JPP20 blends the imagination of designers from Fiat Chrysler’s Mopar unit, Jeep designers and the demands and aspirations of Jeep owners.

Jim Morrison, head of the Jeep Brand, noted during a press conference at the Chicago Auto Show that from its very beginning more than 80 years ago, Jeep has been shaped by the demands of its customers and the tradition of listening carefully to buyers is one of the brand’s authentic hallmarks.

Mopar has entered the picture, in recent, years by creating and testing more than 200 specific parts that could be used to customize the Jeep Wrangler. 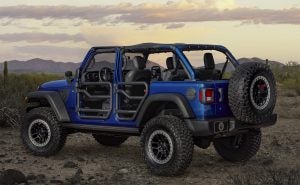 The 2020 Jeep Wrangler JPP20 has scores of Mopar produced accessories.

The list includes everything from the choice of aluminum or tubular doors, steel bumpers and skid plates or a winch with 100 feet of synthetic rope and waterproofing to the protect the Wrangler when it fords a stream. There are also special hinges for the rear gate and even special leather seats.

The Jeep-Mopar partnership also grown into big business. The average buyer of the Jeep Gladiator, which is based on the Jeep Wrangler, spends more than $1,000 for special parts for

that vehicle and the Wrangler is widely considered the most accessorized vehicle in the automotive business.

As it has expanded its accessory and customization business, Mopar has developed small factories alongside various FCA assembly plants with specially trained employees, who are dedicated to customizing vehicles with Mopar-certified parts. 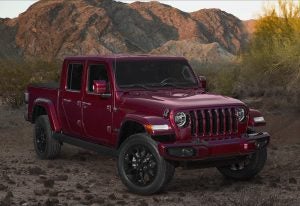 Jeep Gladiator buyers add an average of $1,000 worth of aftermarket accessories when they purchase the truck.

The JPP20 is basically an extension of other successfully accessory program involving the Dodge Challenger and Dodge Charger. However, it is aimed specifically at the off-road space where the Wrangler seems most at home.

Bosanac said Mopar is handling each JPP 20 order as a special event and customers ordering one will get special booklet, commemorating the order. The numbers of JPP 20 vehicles actually produced will be relatively small, FCA officials said.