New pickup will be just the first to carry the new Desert Rated badge. 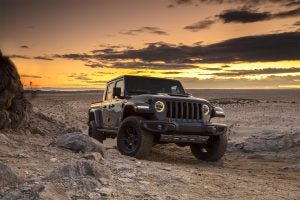 The Jeep Gladiator Mojave will be the brand’s first “Desert Rated model.

Jeep is a brand that always like to push the limits and its Trail Rated models have become a serious contender among those who love rock crawling and other serious challenges. Now, the SUV brand is pushing into new territory with the launch of the first model to carry the new Desert Rated badge.

The Gladiator Mojave edition is the sort of vehicle you might imagine taking out for a flat-out run down the sands of Baja.

“It’s a natural evolution” for Jeep, said brand boss Jim Morrison during a background briefing ahead of the Gladiator Mojave’s debut at the 2020 Chicago Auto Show.

Like the more familiar Gladiator Rubicon, the new Mojave is designed to take some serious punishment, but here it’s tuned for the sort of abuse unique to desert environments, including extreme heat. The new Desert Rated model has been tested to perform at peak in temperatures of up to 140 degrees Fahrenheit, noted chief engineer Pete Milo.

(Live from Chicago! Check out our complete coverage of the 2020 Chicago Auto Show.) 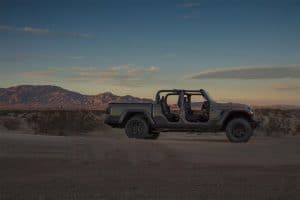 Like other versions of the pickup, Gladiator Mojave’s doors and top can be removed.

Up front, the desert-edition pickup has been raised by 1 inch – yielding an 11-inch ride height — with special steel skid plates added. The Mojave also has been widened slightly and gets a unique hood. It rides on new sand-rated 20-inch wheels and tires.

Visually, the Mojave is distinguished by its gray body paint and matching seats, with orange accents – a counterpoint to the red accents on the Gladiator Rubicon.

There’s a modified version of the Command Trac all-wheel-drive system which allows the Gladiator Mojave to run at speeds of up to 50 mph in low range. The conventional version of the pickup tops out at 30 mph.

Challenging the desert at high speed can be far more demanding than that might initially seem. With vehicles likely to go airborne at some point, Jeep has reinforced both the Mojave’s frame and axles, even adding more durable engine mounts. Add what Jeep bills as “industry-exclusive” Fox hydraulic jounce bumpers and 2.5-inch internal bypass shocks with external reservoirs. 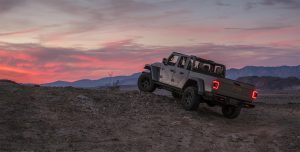 The Mojave edition will carry a price similar to that of the Jeep Gladiator Rubicon.

Only one engine is offered on the Mojave, a 3.6-liter Pentastar V-6 making 286 horsepower and 260 pound-feet of torque. It’s paired with an eight-speed automatic transmission driving all four wheels.

Despite the stiffer frame and beefed up suspension, Milo claims the Mojave will be slightly firmer than the conventional version of the Rubicon on-road, “but not harsh.”

In terms of pricing, look for something “very close to the Gladiator Rubicon,” said Morrison, which starts at $43,875 before adding in delivery charges.

The 2020 Jeep Gladiator Mojave will land in U.S. showrooms during the second quarter of this year. Jeep also plans to offer it in Mideast markets.

While specific plans aren’t ready to be announced yet, company officials didn’t hide the likelihood we’ll see the Desert Rated badge show up on other Jeep products in the coming years.