College teams to compete for $50,000 in scholarship funds. 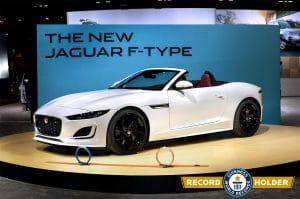 Jaguar goes loopy for Hot Wheels and will offer a $50,000 scholarship to students who can top its new Guinness World Record.

While the all-new 2021 Jaguar F-Type might be the centerpiece of the automaker’s Chicago Auto Show stand, there’ll be some smaller products on display likely to find their own fans.

The British marque’s display features a custom-made Hot Wheels track that, on Thursday, was entered into the list of Guinness World Record holders for featuring the most-ever loop-the-loops. But it’s an honor that, surprisingly, Jaguar doesn’t want to keep for long.

Instead, it announced, it has launched the “Jaguar & Hot Wheels Ultimate Track Challenge scholarship contest to reward a $50,000 scholarship donation to the school team that builds the most challenging Hot Wheels track at a Jaguar retailer and sets a new Guinness World Records title in the fastest time.”

The contest is specifically targeting college programs aimed at automotive engineering, and a student team from the Illinois Institute Technology have already signed up as the first entrant. 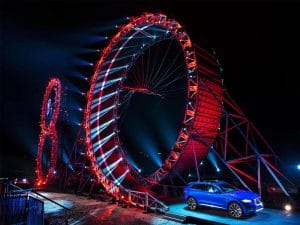 Jaguar apparently has a thing for loop-the-loops, using this set-up to introduce one of its new SUVs a few years ago.

It might not sound like much, but simply completing seven loop-the-loops using only gravity was to build off, according to Mike Zarnock, the Hot Wheels “ambassador” who set up Jaguar’s own track.

Repeated attempts to add one more loop saw the speedy little toy cars fly off the track, he told TheDetroitBureau.com.

Each of the teams will get the same “kit” as Jaguar had to work with, the show track measuring just over 96 feet, according to Zarnock. Initially, the British automaker looked at a few different options of its own in a bid to set a Guinness record, starting with the longest track. It turns out the current holder of that title measures about a half-mile and Jaguar didn’t think the competitors adjoining its stand would be willing to participate.

The automaker is hoping for about 50 different college teams and, beyond looking at the winner to set a new Guinness record, they will be judged, said Zarnock, for their “fit, form and function,” adding that “cool is the key.”

Philip Robertson, an adjudicator – think “judge” for the Guinness organization – said he was more than impressed with the track that Jaguar put together, admitting “I am still trying to figure out how they make so many loops.”

(Jaguar has big plans – and some little ones – for new SUVs.)

The students who enter the contest will have to hope they can use some of their engineering training to pull something even more impressive together to impressive the judges who will be handing out the scholarship.