Despite shrinking sports car market, killing off the F-Type would be "unthinkable." 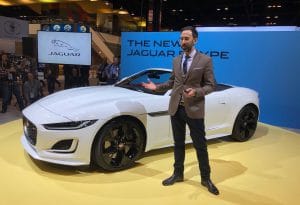 Jaguar brought its second-generation F-Type to Chicago for its U.S. debut.

In keeping with the growing industry trend, Jaguar pulled the wraps off the new, second-generation F-Type online a little while back but didn’t actually give many fans a chance to check it out in person – which is why its appearance this week was one of the highlights of the Chicago Auto Show media preview.

Not only did the F-Type makes its formal auto show debut but we also learned some significant new details from Jaguar officials, including pricing and the fact that the automaker plans to significantly simplify what could be an extremely confusing assortment of model variants with the original F-Type.

“We’ll streamline the number of engines available across the portfolio,” Joe Eberhardt, the CEO of Jaguar Land Rover North America, told TheDetroitBureau.com in an exclusive interview. “And we will have only one trim level for each engine.”

Currently, there are all manner of different engines, depending upon the market, some differentiated only by power output. And there can be a number of different model variants for each engine. Going forward, Eberhardt explained, the U.S. market will have only a 296 horsepower version of the turbo-four engine, a 380-hp supercharged V-6, and the R-Type now gets an upgraded, 575-hp supercharged V-8. 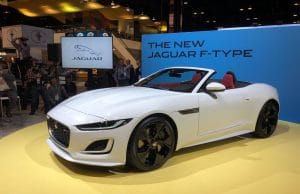 For the U.S. market, the F-Type will get just three engine options ranging from 296 horsepower to 575 hp.

One reason for simplifying matters is obvious: demand for the sports car has slid sharply since the original F-Type was introduced in 2013.

That’s no surprise, sales of all sports cars – as well as sedans and coupes – have tumbled in recent years, reflecting the surge in demand for SUVs and CUVs. Luckily for Jaguar, it has picked up some slack with its E- and F-Pace utility vehicles.

That said, while it was natural for top brass at the British marque to consider whether to continue offering the F-Type, cooler heads prevailed.

“For Jaguar, we had to be respectful of our heritage and understand our roots and DNA,” Eberhardt explained. “Walking away from sports cars would have been unthinkable.”

(Jaguar has big plans – and some little ones – for new SUVs.)

Those familiar with the original Jaguar F-Type won’t be in for any big surprise when they check out the second-generation two-seater. That said, lead exterior designer Dominic Najafi and his team found a way to enhance key styling cues. 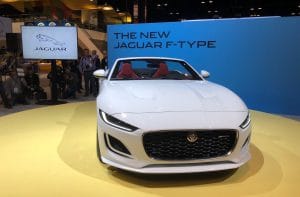 The new Jaguar F-Type gets an evolutional update for its second-generation model.

The new face picks up on the wide, hexagonal shape of the original Jaguar logo, here adopting a new, satin black mesh grille. It’s framed by wing-like new side air intakes. The “bonnet,” or hood, as the Brits prefer, is more expressively sculpted. And the side vents now feature the Jaguar “Leaper” mascot for the first time.

There’s more curve to the silhouette and the rear wheel wells add a bit more flare enhancing the car’s stance. Inside, the updated infotainment system is anchored by a larger touchscreen and there’s a bigger, 12.3-inch gauge cluster behind the steering wheel. The hexagonal logo shape reappears in the stitching of the upper seats.

The F-Type will continue to be offered as both coupe and convertible, the ragtop prices adding from $2,300 to $3,100 depending upon model.

(Jaguar Land Rover Will invest $1.3b to Set Up Battery Car Plant in the UK.)

Look for the first of the 2021 Jaguar F-Type sports cars to reach U.S. showrooms next month.