Hyundai’s Geneva Concept a “Prophecy” of its EV Plans 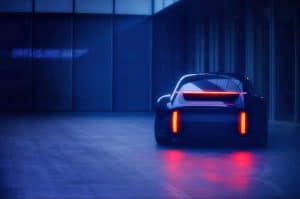 The aptly named Hyundai Prophecy is expected to serve as an automotive crystal ball, teasing the direction the Korean carmaker’s electrification program is heading.

Hyundai Motor Co. is making big plans for electrifying its line-up, the automaker recently announcing plans to invest $87 billion during the next five years while bringing 44 battery and fuel-cell vehicles to market — and the concept vehicle it plans to debut at the Geneva Motor Show early next month will serve as something of a prophesy of what’s coming.

Make that “Prophecy,” the show car adopting the British spelling. The automaker has released this first teaser image and suggests that it reveals the concept’s take on the “Sensuous Sportiness” design language that has already begun showing up on new products like the 2020 Hyundai Sonata.

The announcement leaves us with plenty of unanswered questions, however. The first centers around the battery drive technology underpinning the Hyundai Prophecy concept. The Korean carmaker has an extensive internal development program underway, one that has provided products like the battery-based Kona EV and hydrogen-powered Nexo. But it also has an ongoing development partnership with Croatian supercar company Rimac, as well as a deal with announced this month with EV start-up Canoo. 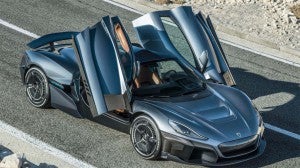 Hyundai announced an investment in Rimac – the Croatian maker of the Concept_Two electric hypercar – in 2019.

For the moment, we’re left guessing as to the power source for Prophecy. It appears all but certain that the EV will use batteries rather than fuel-cell technology. And the emphasis on its sporty design appears to back up what a couple well-placed observers believe: that the Geneva concept will be the first clear showing of what’s to come from Hyundai’s relationship with Rimac.

The smaller company is based in a country not typically known for its automotive prowess, Rimac the eponymous effort of entrepreneur Mate Rimac who began tinkering with EVs when he was barely 20.

“Rimac is an innovative company with outstanding capabilities in high-performance electric vehicles,” Hyundai Vice Chairman Euisun Chung said in May 2019, when he announced plans to invest $90 million in the Croatian enterprise. 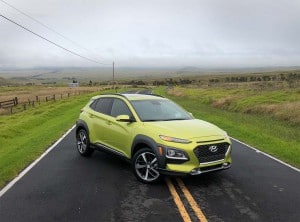 The Kona EV is one of several electrified models Hyundai fully developed in-house.

Hyundai isn’t alone, Porsche one of several other automakers that have invested in or otherwise linked up with Rimac during the last several year.

While Hyundai’s Chung called Rimac “the ideal partner for us,” the Korean manufacturer has remained vague about precisely what it expects to get out of the alliance. Adding to the confusion, Hyundai this past week announced it also is teaming up with EV maker Canoo. The California-based start-up recently unveiled the Canoo Canoo – really – a vehicle that looks like an SUV with its front end sliced off.

Hyundai is expected to use the underlying, skateboard-style platform for an electric vehicle expected to be similar in size to the current Hyundai Accent. But the flexible architecture eventually could show up in other products.

Hyundai has also teamed up with a third EV developer. Last month it invested $110 million in UK-based Arrival. That start-up will focus on commercial vehicles, however. 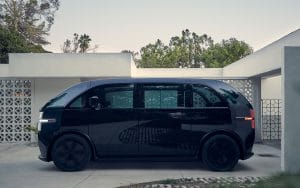 Hyundai has also invested in California EV start-up Canoo, with plans to use its skateboard system for an Accent-sized battery-car.

So, what do we know about the Hyundai Prophecy?

“The name,” the automaker says in a news release, “reflects the concept’s purpose, defining the direction of future Hyundai designs, while establishing itself as a design icon for Hyundai’s EV line-up.”

What we see is a boat-tail design, the rear quarter panels flowing into an integral spoiler and pixelated taillights.

“”Prophecy” does not follow trends. It accentuates timeless beauty that will stand the test of time,” said SangYup Lee, Hyundai’s global design chief. “Its iconic design stands to expand Hyundai’s design spectrum toward even broader horizons.”

There’s a bit of Porsche Taycan to the look, or perhaps a hint of what the German automaker’s planned all-electric version of its Macan SUV might look like. And, intriguingly, Rimac is widely believed to be participating in that development project.

We hope to get more answers in the coming weeks, and certainly lean still more when the Hyundai Prophecy makes its debut at Geneva’s PALExpo convention center on March 3rd. The Korean maker is expected to expand upon its electrification plans during its news conference and we’d be surprised if Prophecy were the only model it rolls out that day.