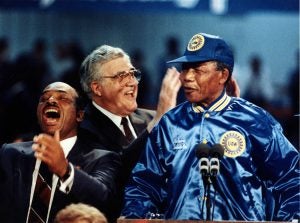 Bieber, whose passing was announced by the union, was the UAW’s seventh president and led the UAW for 12 years, from May 1983 to June 1995. His 12-year tenure was exceeded by only Walter Reuther. He succeeded Douglas Fraser, serving four consecutive three-year terms as president.

“Owen Bieber’s death is a loss for our union and all working people,” UAW President Rory Gamble said in a statement. “He was a man of incredible leadership. He was not afraid of tough battles or taking a stand on controversial issues.

“He was not only a devoted trade unionist but a social activist whose impact was felt around the world. Whether it was his support to end apartheid in South Africa or in Poland, Owen stood on the right side of history for the nation and the world.”

UAW President Rory Gamble said Bieber was “a man of incredible leadership.” Like Bieber, Gamble is serving during difficult times for the union.

General Motors, in a statement, said: “Owen Bieber will be remembered for his commitment to workers and his leadership of the UAW through challenging times for more than a decade. The entire General Motors family would like to extend its deepest sympathies and condolences to his family.”

“Owen Bieber will be remembered for his passionate commitment to workers, leading the UAW for more than a decade. We extend our deepest condolences to his family and the UAW,” said Kevin Legel, vice president, Labor Affairs, Ford Motor Co., in a statement.

“FCA extends its deepest condolences to the Bieber family and the UAW on the loss of Owen Bieber,” Fiat Chrysler said in a statement. “Owen will be remembered for his unwavering commitment to championing the causes of working people, and fighting tirelessly to protect the standard of living for millions of UAW members and their families. Owen’s leadership in calling attention to labor and civil rights movements, whether here at home or around the world, will be part of his legacy.”

Bieber’s time at the helm was one of great change. He oversaw the creation of the Jobs Bank, which was designed to keep General Motors, Ford and Chrysler from eliminating jobs. Workers in the program were paid nearly their full salary to perform community service or even do nothing at all.

Japanese automakers began making substantial progress in the U.S. market during that time so the Jobs Bank helped with the job losses that came as a result of the reduced sales by the Big Three. Like those who followed him, he was unable to expand the union’s membership with the new employees of those Japanese companies that set up plants in the U.S.

Bieber also offered some flexibility to the automakers. When GM wanted to establish Saturn as a “different kind” of car company, he allowed for a separate contract for the Spring Hill, Tennessee, workers. In the long run, Saturn died as part of the automaker’s 2008 bankruptcy, and the workers at the plant now are covered by the same deal as the others. 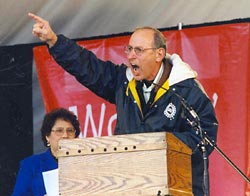 Bieber also played a role in the diversification of the union’s membership, adding to the membership roles from non-manufacturing sectors, such as government employees.

His union legacy lives on through his son, Ron Bieber, who is currently is president of the Michigan AFL-CIO, which represents a variety of labor organizations.

Born in North Dorr, Michigan, in December 1929, Bieber began working at McInerney Spring and Wire Co. in Grand Rapids, in 1948 after graduating high school. It was the same auto supply plant where his father worked.

He was elected UAW president in 1983 during the union’s 27th Constitutional Convention in Dallas. He succeeded Douglas Fraser and served four consecutive three-year terms.