He's the second former official to get jail time. 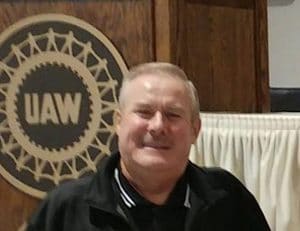 A federal judge sentenced a former United Auto Workers official to 28 months in prison and approved an order calling for him to forfeit $1.5 million, which he obtained by conspiring to take kickbacks from vendors selling merchandise to joint programs operated by the UAW and General Motors.

Former UAW staff member Michael Grimes was instructed to report to the U.S. Bureau of Prisons by Judge Bernard Friedman to begin his sentence at a future date.

Federal prosecutors recommended Grimes serve a two-year prison term since he had been cooperating with the investigation into corruption inside the UAW. The motion by the federal prosecutors mitigated the impact of federal sentencing guidelines, which held that Grimes could have served between 46 months and 57 months, given the severity of his crimes.

In the end, Friedman said his decision to impose a tougher sentence than the one sought by the government was influenced by letters he had received from UAW members and staffers. Grimes had made the job of union’s staffers, who depend on “loyalty, integrity, trust, pride and respect” to do their job as they deal with employers and build solidarity in the ranks, much more difficult, one of the letters Friedman read from the bench noted.

Former UAW Vice President Norwood Jewell is serving 15 months in prison after pleading guilty. He reported to prison in Wisconsin.

“I don’t agree that this was a victimless crime,” Friedman added as a served up a rebuttal to the comments offered by the defense that Grimes had never stolen money from the union directly. The merchandise, such as jackets and backpacks, were sold in a store inside a GM plant run by the UAW. “The members paid higher prices,” he said.

“We all will be affected by what he has done, spouses, children and grandchildren,” Lynda Eckstrom, who was invited to speak during the sentencing hearing. “He had a fiduciary responsibility with the membership, and it was not fulfilled,” added Eckstrom, whose wheelchair-bound husband also appeared in court.

After the hearing, Grimes said he was sorry for what he had done for his part in hurting the UAW. “Grandfather and my father were union members,” added Grimes, who said he was deeply embarrassed by his part in the conspiracy to accept kickbacks from vendors.

Former UAW Vice President Joe Ashton pleaded guilty to federal charges in early December. He will be sentenced in March.

Grimes also has resigned from the UAW after the union moved to expel him.

“Mike Grimes violated his oath of office and betrayed the trust of all our hard-working members. That is why … the UAW International Executive Board filed its own action against Mr. Grimes taking away his membership in the UAW. While our union is moving forward, we will never forget the costly lessons from our past,” the UAW said in a statement after Grimes hearing.

“The UAW worked quickly to implement a series of critical reforms that were necessary to strengthen the union’s financial controls, oversight, and its overall accounting system so this type of conduct cannot happen again,” the statement said.