New SUV to debut at next month’s Geneva Motor Show. 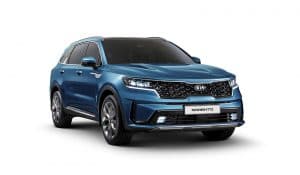 The 2021 Kia Sorento rides on a longer and all-new, fourth-generation platform.

When it comes to SUVs, Kia has been on a tear, rapidly expanding its line-up with new offerings like the compact Seltos and the big Telluride, the latter being named North American Utility Vehicle of the Year last month. The Korean carmaker hasn’t ignored its existing line-up, however, and the Sorento is about to get a complete makeover for 2021.

While we’ve seen spy shots and teasers in recent months, these are the first official images of the 2021 Kia Sorento, the crossover set to make its public debut at the Geneva Motor Show March 3.

The new look is more aggressive on the exterior, with a more lavishly executed cabin, a statement from the automaker suggesting its goal was to create something, “more confident, more mature and more desirable … than ever.” 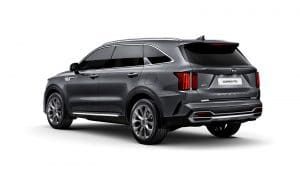 Expect to see a mix of I-4 and V-6 engines and possibly one or more hybrid drivetrains.

The statement accompanying these images focuses almost entirely on styling. We’ll likely have to wait for the Geneva debut to learn more from a technical standpoint, though there is widespread speculation that, along with a mix of inline-four and V-6 gas engines Kia will electrify the 2021 Sorento, as well.

A hybrid version is all but certain to reach U.S. showrooms at some point. Less clear is whether a plug-in hybrid also is in the works and, if so, if we’ll get that PHEV, too.

The fourth-generation Kia Sorento was, until last year, the brand’s utility vehicle flagship – a role now handed over to the bigger, more luxurious Telluride. That said, Sorento continues to target those who want plenty of space, as well as the versatility a third row can offer.

From an exterior viewpoint, one readily sees the updated styling direction Kia is taking. There is the strong influence of the Telluride, but also some of the touches we see on the new Seltos, such as the broader, more diamond-patterned “tiger nose” grille that flows into what are, here, triple-beam lamps with integrated “tiger eye” LED running lights. 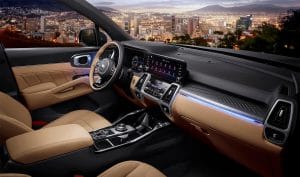 The 2021 Kia Sorento appears to take a big step up in terms of its interior refinements.

With the Telluride now positioned as the brand’s big family hauler that helps reposition Sorento as something a bit more sporty. That’s backed up by the more aggressive front fascia with a large lower intake framed by quad fog lamps.

From the side, there’s more sculpting to the fenders and door panels, with a subtle crease just below the greenhouse. According to Kia, designers took advantage of the 2021 model’s all-new platform, including the longer wheelbase, to accent the 2021 Sorento’s overall length while also shortening front and rear overhangs.

From the rear, the old horizontal taillights have been swapped out for vertical strips accenting the CUV’s width.

It’s what you’ll find inside that could come as the biggest surprise, however. If you’ve missed the Telluride and other recent Kia entries, be prepared for a pleasant surprise. This is no longer a bargain brand. The new Sorento’s cabin is surprisingly plush – with these images all but certainly revealing the top-end trim level. 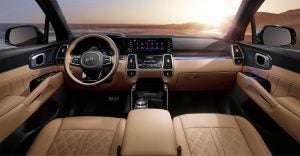 Kia claims the 2021 Sorento will be the most high-tech model it’s ever introduced.

Even the steering wheel gets the two-tone treatment, with what appears to be double-stitched leather on the doors and diamond quilting on the front seats. There is metallic trim, Kia notes, as well as “embossed wood-effect surfaces.”

The center stack is topped by the 10.25-inch touchscreen first seen on Telluride, with a 12.3-inch high-resolution digital instrument cluster. Kia also hints that “The progressive technologies available in the new model make it the most high-tech vehicle Kia has ever created.” We’ll assume these include both infotainment features as well as new advanced driver assistance systems – but more is likely to come out at the Geneva reveal.

Targeting Asian competitors like the Honda Pilot and Toyota Highlander, Kia says we’ll see the 2021 Sorento on sale in the U.S. “by the end of year,” and it suggests the pricing will start “at just under $30,000.”