No need to bury your head in the sand. This SUV is ostrich-approved. 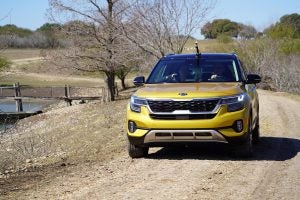 Test-driving a new car might sound like an ideal job – and there are certainly some nice perks. But there also can be some risks – as we learned while heading off-road in the new 2020 Kia Seltos last week.

Keep a sharp eye out for Oscar the Grouch, we were warned, before being told that if he’s in a really bad mood, he can run as much as 46 miles an hour and then deliver a kick that will send a grown man to the hospital. No, we’re not talking about the familiar Muppet from Sesame Street but the 9-foot, 330-pound ostrich roaming the game farm in Texas Hill Country being used for the off-road portion of our drive.

To our good fortune, Oscar was caged up this particular day, having done some real damage to one of the new Kia SUVs earlier in the week. His only slightly smaller, lighter mate was far more friendly, seemingly pleased to pose for a picture with the new Seltos. We have a feeling she won’t be the only one. 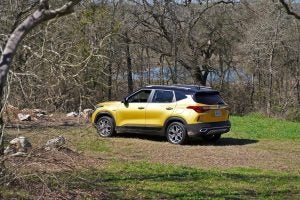 The 2020 Kia Seltos is offered with a choice of two different engines and front or all-wheel-drive.

The compact Seltos is the latest in the growing line-up of crossover-utility vehicles from the Korean carmaker. Kia scored a hit with the big Telluride it launched for 2020. Not only did it win honors as the North American Utility Vehicle of the Year but it has been in such popular demand that Kia dealers have less than a 10-day supply on hand right now – compared to an industry-norm 60-65 days of inventory. Now comes Seltos which slots in-between the quirky little Soul and the more mainstream Sportage.

As with most of the rest of the Kia line-up, Seltos shares its basic underpinnings with a Hyundai product – in this case the larger brand’s Kona crossover. That said, the two marques have been doing a great job of distinguishing their products. So, while the basic dimensions are pretty similar, we’re confident you won’t confuse the two offerings, whether in terms of looks, features or driving dynamics.

To start with, the 2020 Seltos features the latest take on the familiar Kia “tiger nose” grille. Here, it’s wider and more aggressive, with the SUV’s slit-like headlamps melding into the grille frame. The U.S. version gets a more upright face than the “global” Seltos reflecting different target audiences. That includes an integral skid plate angled to allow you to do a little bit of off-roading, should you be so inclined. 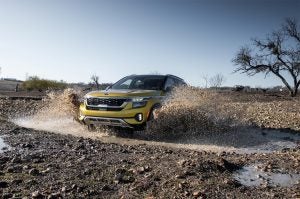 From the side, Seltos has a nicely chiseled appearance, with wheel wells accented by black cladding that gives the crossover an aggressive touch without crossing into the cartoonish, as we’ve seen with so many recent CUV entries. Mid and upper trim levels get a chrome accent to their beltline, with more chrome accents connecting the twin exhaust pipes. Seltos is offered with both 17 and 18-inch wheels, again, based on the trim. One of the nicer options available with Seltos is a two-tone roof.

As for the cabin, it’s roomier than one might expect for something in this category. Even a six-footer can squeeze comfortably into the rear seats and, with the back row folded down there’s almost 63 cubic feet of cargo space.

The horizontal layout of the instrument panel helps enhance the perception of width. Kia has done a good job topping the IP with its latest touchscreen display. The base system features an 8-inch screen, the upgrade growing to 10.25 inches. As with other recent offerings from Kia and Hyundai, the infotainment system is reasonable easy to navigate through, with a good voice recognition system. 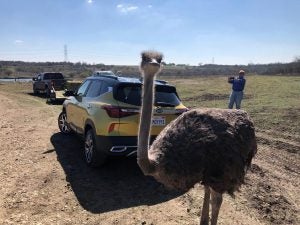 This female ostrich, it turned out, was far friendly than Oscar the Grouch.

On the whole, Kia’s product development team has made Seltos look more lavish than its $23,110 base price – including $1,120 for delivery fees – would suggest. The one, odd shortfall is the “mouse fur” material used for the headliner, something we would have hoped might vanish from the Korean company’s bill of materials by now. It’s easy to overlook, however, considering the overall look and feel of the cabin.

From a powertrain perspective, the 2020 Kia Seltos offers two options:

·         A 2.0-liter inline-four using the fuel-saving Atkinson Cycle. It makes an acceptable 146 horsepower and 132 pound-feet of torque and is paired with a continuously variable transmission;

While you can get the base Seltos with the 2.0-liter naturally aspirated engine in a front-wheel-drive configuration, almost everyone is expected to go for an all-wheel-drive package. One of the advantages is that, with AWD, Seltos offers torque vectoring, carefully using power to help steer itself through tight corners. Meanwhile, there’s also a locking center differential for slick traction situations. 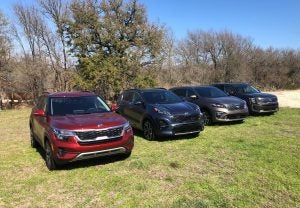 From Soul to Telluride, the addition of Seltos  now leaves no real gap in Kia’s SUV line-up.

And Seltos features three different driving modes that regulate both throttle and transmission response, as well as steering feel.

In practice, we found that while Seltos was a very slight bit numb, its steering was extremely predictable, with a nice on-center feel to it. Our route through Texas Hill Country included plenty of back road situations. That meant lots of sharp curves, sudden, often unexpected expected elevation changes, and a variety of different pavement surfaces – often within a matter of seconds. If a carmaker wanted to cover up a vehicle’s flaws in its on-road manners, well, this was precisely not the route you would take.

Instead, it demonstrated just how solid a package Kia has pulled together. The Seltos managed everything thrown at it with aplomb, from high-speed freeways to the rutted trails of that Hill Country game farm.

There was also far less road and wind noise than you’d expect from a vehicle in this price class – a well-equipped Seltos SX with the turbo-four engine and AWD just nudging $30,000. 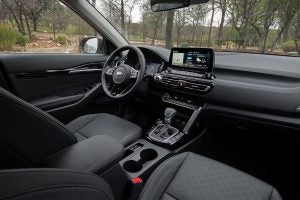 The 2020 Seltos has an overall well-executed interior – but can we lose the mouse fur?

In terms of performance, the 1.6-liter turbo responds quickly to every twitch of your foot – without itself feeling twitchy. We felt only the rarest hesitation off the line and, with rare exception, the DCT always seemed to know the best gear to be in.

Unfortunately, we didn’t have an opportunity to take out the base model with the 2.0-liter engine, and hope to report on that in the near future.

Considering young families are expected to make up a sizable share of Seltos buyers, they’ll likely be pleased to see the range of standard and advanced safety technologies offered as standard equipment on all but the base model. Along with features like forward collision warning, there are a number of optional smart safety technologies, such as rear cross-traffic avoidance, cyclist detection and blind-spot alert.

On the fuel economy side, mileage comes is at 27 City, 31 Highway and 29 Combined with the 2.0-liter engine in FWD configuration, while the high-spec Seltos SX with the turbo-four and AWD drops that to 25/30/27.

Considering that Kia was all but an afterthought in the SUV market just a few years ago, the Korean carmaker has done a solid job of fleshing out its utility vehicle line-up. For those who want good looks, a solid line-up of features and great driving dynamics, it’s going to be hard to ignore the 2020 Kia Seltos.