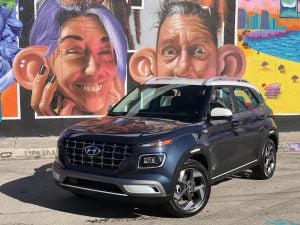 Hyundai was relatively late to the SUV party, a fact that hit it hard on the sales chart as buyers abandoned familiar sedans like the Elantra and Sonata for competitors’ utility vehicles. The Korean carmaker is now making up for lost time with an array of new offerings such as the big Palisade launched last year and, at the other extreme, the little Venue just rolling into U.S. dealer showrooms.

The subcompact crossover segment is quickly getting crowded – sibling brand Kia soon to weigh in with its own offering, the Seltos. With a base price of $18,000, the 2020 Hyundai Venue is targeting young urban buyers on a budget. But, unlike some of the stripped-down econoboxes the brand once relied on, shoppers will discover a surprisingly stylish and well-equipped package for the money, with an assortment of appealing standard features – including the high-tech gear Millennials and Gen-Z motorists crave.

To get a feel for the new Hyundai Venue we headed down to Miami for a drive that took us well into the Florida Keys. Clearly not the most demanding of terrain, but we clocked enough time behind the wheel to get a good feel for what is now Hyundai’s sixth utility vehicle.

(Hyundai lays out aggressive growth plans for its SUV line-up.) 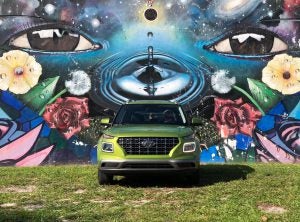 Visually, Venue is an attractive vehicle, with an overall solid and well-planted appearance that belies its modest size – just 159 inches nose-to-tail, a full 10 inches shorter than Nissan’s entry offering, the Kicks. The broad Hyundai grille is framed by split lamps that remind us of the bigger Jeep Cherokee. From the side, the Venue is nicely sculpted, with a subtle slope to the roofline. One of the more endearing features is the optional two-tone paint scheme that was offered on the Venue Denim trim we spent most of our day in.

Despite the modest size, Venue’s interior is reasonably roomy. The broad stance means driver and passenger won’t be bumping shoulders. Equally important, rear seat occupants won’t find their knees jammed into the front seatbacks unless there’s an NBA player up front. As you’d expect of a vehicle in this class, there’s a fair amount of plastic in the cabin, but Hyundai designers took pains to give things a better look and feel than you otherwise might expect, with textured surfaces and soft touchpoints.

The Denim model is likely to get plenty of attention, not only for the two-tone roof option but for the interior detailing that takes Venue up a notch. That includes, appropriately enough, denim-like material on seats and doors. 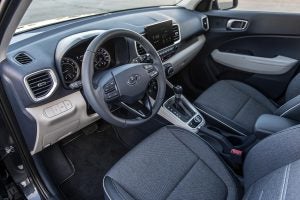 The Denim interior adds some hip touches to the look of the 2020 Venue.

Potential young buyers will likely find their eyes drawn to the 8-inch touchscreen display that comes standard on all trim levels of the 2020 Hyundai Venue. The infotainment system comes with Bluetooth for both phone and audio connections and also features both Android Auto and Apple CarPlay.

On a more practical basis, Venue offers 18.7 cubic feet of storage behind the second row, roughly average for the segment, though it delivers a better 31.9 cf with the rear seats folded down.

To get as much room in the rear – and to hold down costs – Hyundai engineers opted for a torsion beam rear suspension. They also decided against offering all-wheel-drive. During a background briefing ahead of our drive down to the Keys, however, Hyundai officials demonstrated the crossover’s modified traction control system which does a reasonably good job of shifting torque between the front wheels. The Venue clearly isn’t designed for off-roading, but it appears well equipped to handle snow and other day-to-day challenges. 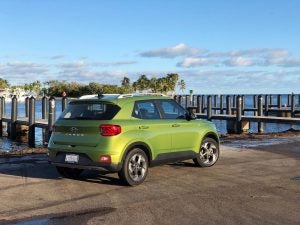 Hyundai opted for a live rear axle and Venue is available in front-wheel-drive only.

The crossover is powered by a new, 1.6-liter naturally aspirated engine making 121 horsepower and 113 pound-feet of torque. We’ve gotten used to seeing turbos in this segment of the market, but the four-banger proved to be up to the job, providing a reasonable amount of torque the moment you squeeze the throttle.

In what is becoming a less and less common exercise, Hyundai is offering Venue buyers a choice of transmissions, including a six-speed stick and a wide-ratio continuously variable transmission. The row-your-own gearbox 27 mpg City, 35 Highway and 30 Combined. The CVT does better in two out of the three categories, the EPA rating it at 30 City, 34 Highway and 32 Combined.

Hyundai did a good job of spreading out the gear ratio range the CVT can cover, helping both fuel economy and performance. There’s still a bit of that motor boat quality under hard acceleration, however. We found the stick a better option for those who want to feel a bit of connection to the vehicle.

Despite the live rear axle, we found that the 2020 Hyundai Venue handled well – at least under the relatively unchallenging condition you find in Southern Florida. It handled abrupt lane changes with aplomb and soaked up all but rougher bumps and potholes. 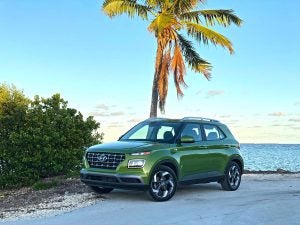 At just 159 inches in length, the 2020 Hyundai Venue is one of the smallest vehicles in its class.

As with the rest of the Hyundai line-up, the automaker has put a focus on safety, all versions of Venue getting a number of desirable standard features that include forward automatic emergency braking with pedestrian detection, lane-keeping assist, automatic headlights and driver attention warning. The Denim adds blind-spot and cross-traffic detection as standard gear, those two features available as options on the Venue SEL.

As we mentioned, the subcompact crossover segment is getting crowded fast. The list now includes models like the Nissan Kicks, the Honda Fit and, in a matter of weeks, the Kia Seltos, among others.

All things considered, however, the 2020 Hyundai Venue is a worthy package to consider. With an eye-catching design, reasonable performance, some nice features and a budget-friendly price tag, it redefines the concept of “entry level.”

(Kia rounds out its SUV line-up with new Seltos.)