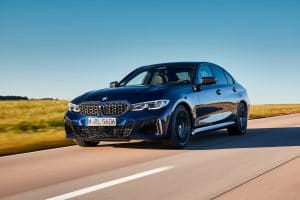 BMW’s M-Series has built up a unique mystique that places them near the very top of the automotive heap.

But you always have to wonder if the performance can live up the aura around the M-designation, which is one the reasons I welcomed the opportunity to drive M340i.

For one thing it turned out that the 2020 M340i xDrive sedan was enormous fun to drive. It was everything you could want in an automobile. It was quick, nimble and seemed to anticipate the best way to tackle the road ahead.

Of course, cars an inanimate object that equipped to move around thanks to an updated version of BMW’s classic 3.0-liter inline six-cylinder engine. The new version of the straight-six engine produces 382 horsepower and peak torque of 369 foot pounds, and you feel every bit of the power when you have the opportunity to put your foot down.

BMW engineers and test drivers say the M340i xDrive can go from zero to 60 mph in 4.2 seconds. I don’t have access to their test equipment but in my informal test showed that the zero to 60 time is undoubtedly pretty much on the money. 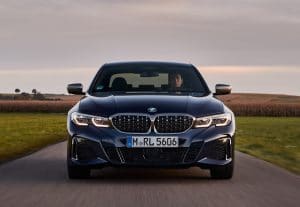 The updated 3.0-liter engine, which was matched up with an eight-speed automatic transmission, featured an aluminum crankcase and aluminum cylinder head. Also, there is a single, twin-scroll turbocharger with an integral, compact, steel exhaust manifold and impellers that weight approximately 25% less than those of preceding models and builds boost pressure more rapidly, according to BMW.

Resonance and engine notes as well as power and acceleration, have been part of the tactile pleasure that when the company is on its game, BMW can build into cars and sounds of the inline six-cylinder engine has gained some extra depth from the dual-pipe exhaust system.

In Sport and Sport+ modes, which can be activated via the Driving Experience Control switch, the valve-controlled exhaust system generates a particularly distinctive sound as well.

But the power from the engine is only part of the story of the BMW M340i XDrive.

BMW always has been a leader in making sure its cars had impressive driving dynamics and this car’s suspension, steering and brakes maintain the tradition. The car is so well balanced it almost 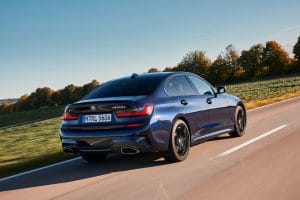 In Sport and Sport+ modes the valve-controlled exhaust system generates a particularly distinctive sound as well.

seems to drive itself. The steering is quick and responsive, the car stays flat through the sharpest corners and tightest curves and the brakes come on instantly needed.

The overall performance offers drivers a level of confidence only a few other sport sedans can match.

But BMW also is known for the skill of its designers and the M340i’s long hood and short overhangs at the front and rear wheels make for a package attractive to the eye and also give the four-door sedan silhouette a sense of balance, proportion and class that is most appealing.

On the inside, BMW has adhered to the less is more tradition of modern European design. The dashboard and instrument cluster and head unit are very straight forward and accented with bright work that gives the interior a classic feel. The inner door panels and headliner are nicely tailored, and the seat is of the most comfortable I’ve encountered in any vehicle. 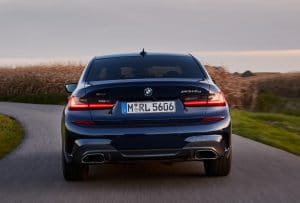 BMW has adhered to the less is more tradition of modern European design with the new M340i xDrive.

BMW, however, also goes behind the old measures of performance such as power and handling and elegant styling. It has taken steps to ensure that its cars also are equipped with the latest technology such as connectivity, a first-rate entertainment system and driver assistance features that quite expert.

For example, when its activated, the lane keeping feature makes it difficult to move over one lane unless you properly signal, which of course you should do always.

The M340i xDrive I drove also had also had a heated steering wheel, remote start, moonroof, wireless charging, Apple CarPlay for the connected package and M-badges throughout the car.

The price tag for M340ixDrive is just under $70,000, $69,570, to be exact, which is considerably more than the price of the average vehicle sold in the United States these days. But it also matches up well in overall performance with so-called super cars that sell for infinitely more and may not be nearly as much fun to drive day and day out.