The murals will reflect the eastside of Detroit. 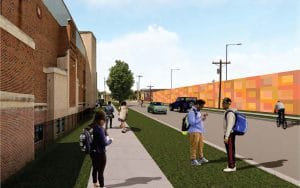 Fiat Chrysler is working with the City of Detroit to create an art installation to help its new plant promote the east side of the city.

Detroit’s urban distress has captured the attention of both homegrown artists and creatives from other parts of the world attracted multiple narratives of strife, decay and regeneration.

Now the City of Detroit at Fiat Chrysler Automobiles N.V. hope to use FCA’s new, $1.6 billion automobile plant as a canvas for murals project that enlivens the neighborhood around the new plant and create a large art installation that can stand on its own merits.

FCA will join Detroit’s Office of Arts, Culture and Entrepreneurship and City Walls Detroit murals program to issue a global open call to artists to create works that will comprise one of the largest municipal art installations in Detroit’s history, the company said.

“Our commitment to this city goes well beyond our facility,” said Mark Stewart, chief operating officer of FCA – North America. “We (FCA, the City of Detroit and residents) have a shared responsibility for the neighborhood around the new plant. These murals will reflect the values and identity of the community and our shared vision for a positive future.” 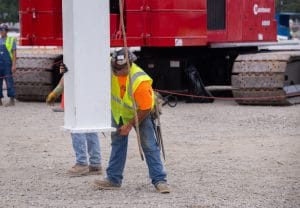 Workers move pieces of steel that form the structure of the new 800,000-square-foot paint shop being built on the site of the former Mack Avenue Engine Complex.

The planning for the project envisions the canvases stretching along “The North Wall,’ which runs along Beniteau Street, immediately across from Southeastern High School and “The South Wall,” located at Beniteau Street and Kercheval Avenue, facing a new stormwater park that is part of the redevelopment of the century-old industrial complex that is the home to the new FCA.

The park is stated included a walking path, pollinator gardens and an educational pavilion. When the project is completed, Detroit’s east side will have one of the largest municipal mural installations in the region at 15 feet high by 1,500 feet long.

The goals include ensuring that the design represents both the rich history and bright future of Detroit’s eastside neighborhoods and engage its residents, especially students, in creating the mural’s design.

(FCA racing ahead on construction of new Detroit plant.)

“This wonderful gift from FCA is just another example of how much arts and culture are alive and well and thriving here,” said Rochelle Riley, the City’s director of Arts and Culture. “And even more great things are coming in Detroit, where the arts are a way of life.” 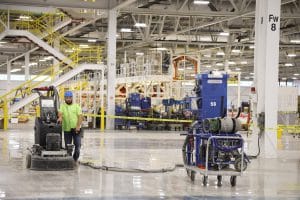 A worker polishes the floor of the former Mack II engine plant, which is being converted into the body shop for the new plant FCA is building on the east side of Detroit.

The mural project is part of the Community Benefits Agreement between FCA and the City of Detroit, a partnership that provides more than $35 million in support for neighborhood improvements, housing, workforce development, education and training programs, and environmental initiatives.

FCA announced in 2019 it would convert two existing Mack Avenue facilities into a new assembly site for an all-new, three-row, full-size Jeep SUV and the next-generation Jeep Grand Cherokee.

FCA also will invest $900 million at Jefferson North to retool and modernize the plant for continued production of Dodge Durango and next-generation Jeep Grand Cherokee. In total, the move will create 4,950 new jobs.