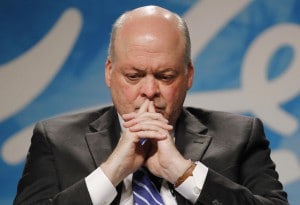 Ford Motor Co. suffered through a disastrous fourth quarter in 2019, losing $1.7 billion, or 42 cents per share, which included a pension readjustment that cost the company $2.2 billion, and it expects a tough start to 2020.

The company’s adjusted earnings before interest and taxes were $485 million, down 67%, with improved results in China and Europe more than offset by a decline in North America, which remains the mainstay of the company’s business.

“Financially, the company’s 2019 performance was short of our original expectations, mostly because our operational execution – which we usually do very well – wasn’t nearly good enough. We recognize, take accountability for and have made changes because of this,” Ford CEO Jim Hackett said in a statement.

Hackett also said Ford made great strategic progress during the past year. “With a fundamental redesign of Ford that is setting us up to compete and win in this emerging era of Smart Vehicles for a Smart World – with great products, services and long-term value,” he noted. 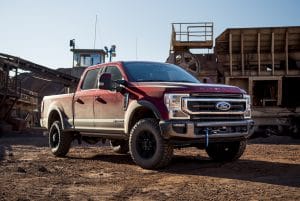 Strong F-Series sales in the U.S. were not enough to offset poor results for the rest of the line-up.

Part of that progress included the November reveal of the Mustang Mach-E, the company’s new battery-electric vehicle. Additionally, Ford carried out key parts of perhaps the most ambitious vehicle renewal in its history. By the end of 2019, 40% of Ford’s global product portfolio was new since the end of 2017. The figure is expected to reach 90% by 2022.

Additionally, Ford entered strategic agreements and partnerships around the world – with VW, Rivian and Mahindra – to complement and accelerate its own capabilities in autonomous and electric vehicles and in emerging and emerged markets. The company also took a number of actions to bolster underperforming parts of its businesses.

Ford’s European operations, for example, generated $21 million in EBIT in the fourth quarter versus a loss of $199 million a year ago – and improved to nearly break-even for the full year. The business refocused its resources on three product segments: commercial vehicles, selected passenger vehicles and iconic nameplates, such as Mustang.

At the same time, the business became more efficient, announcing plans to close or sell six manufacturing plants and eliminate 12,000 positions across the region.

Ford’s fourth-quarter operating loss in China was 61% smaller than in the year-ago period, thanks to lower structural costs. This was the fourth straight quarter of year-over-year improvement in China. Nonetheless, Ford lost $771 million in China in 2019. 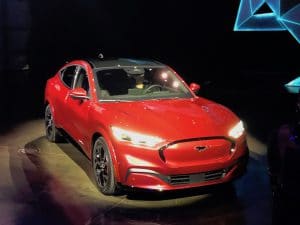 The Mustang Mach-E was one of the company’s highlights for 2019, but it’s not adding to the bottom line until it arrives next year.

In South America, Ford exited production of heavy trucks and discontinued unprofitable sedan models, closing a plant in São Bernardo. The company’s regional workforce today is more than 40 % smaller than it was only three years ago, Ford executives said.

Overall, Ford’s revenue in the fourth quarter was $39.7 billion, down 5% while its Automotive EBIT for the quarter was $215 million, 81% lower.

Ford Credit, on the other hand, had an exceptional year, posting its best results in nine years, with $3 billion in earnings before taxes. 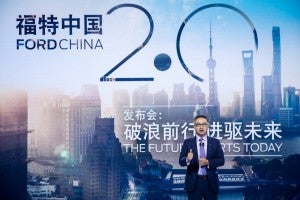 Despite a poor sales year in China, the company saw operational progress there, cutting its losses by 61 percent in 2019.

In the first quarter, Ford expects adjusted EBIT to be down more than $1.1 billion from the first quarter 2019 as a result of the continuation of higher warranty costs seen during the second half of 2019, lower vehicle volumes, lower results from Ford Credit, and higher investment in Mobility.

Ford’s guidance assumes no material change in the current economic environment, including commodities, foreign exchange and tariffs. The company also noted it is too early to estimate implications of the coronavirus outbreak on its business, particularly in China where the company has suffered a series of business reverses.

Excluding any possible effects from the coronavirus issue, for full-year 2020, the company anticipates adjusted free cash flow of $2.4 billion to $3.4 billion and adjusted EBIT of $5.6 billion to $6.6 billion, which assumes at least nominal growth in the Automotive business, offset by lower EBT from Ford Credit and modestly higher investment in mobility.