Problem with wiring harness could lead to fire. 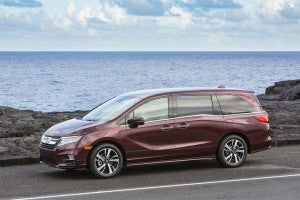 American Honda is recalling more than 240,000 of its late-model Odyssey minivans due to a wiring harness problem that could lead to a fire in the vehicle.

The automaker is recalling about 241,000 model-year 2018-2020 Honda Odyssey EX-L, Touring and Elite minivans in the United States to deal with the problem, which has led to three reported fires, but no injuries, according to the automaker.

The company has instructed dealers to inspect, reroute and wrap in insulating tape the wire harness leading to the third-row accessory power outlet. If the wire harness is found to be damaged, it will be replaced, for free.

The wire harness leading to the third-row accessory power outlet may have been damaged when the interior panel covering the harness was installed, pinching it between the panel and the metal vehicle body.

If the wire harness was damaged, a short circuit can occur, heating the plastic harness cover and potentially leading to a fire. Honda is aware of three fires related to this issue with no reported injuries.

Honda is announcing this recall to encourage each owner of an affected vehicle to take it to an authorized dealer as soon as they receive notification of this recall from Honda. Mailed notification to owners will begin in mid-March.

The recall is the second for the Japanese automaker in less than a month. In mid-January, Honda recalled 2.7 million vehicles to replace faulty Takata airbags. The airbags aren’t the same version responsible for at least 24 deaths worldwide, but they could explode in a similar manner, sending plastic and metal shrapnel into the vehicle cabin.

Honda’s been hit hard by the Takata recall during the past years, including more than a dozen deaths of vehicle owners in the U.S. In fact, the most recent Takata death involved an unidentified driver operating a 2002 Honda Civic involved in a crash near Phoenix in June 2018. Hundreds more people have been injured.