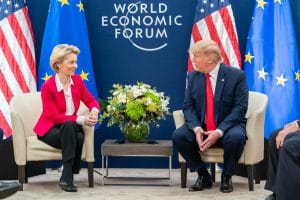 Months after pulling back on plans to impose hefty tariffs on European auto imports, President Donald Trump again raised that threat during interviews at the World Economic Forum in Davos, Switzerland.

In November, the administration let pass the deadline on enacting auto tariffs of up to 25% that would have been justified under a study by the U.S. Commerce Dept. claiming they posed a threat to national security. But, in a pair of TV interviews, Trump again raised the prospect of a new trade war with the European Union.

“I met with the new head of the European Commission, who’s terrific. And I had a great talk,” he told CNBC’s Joe Kernen, referring to Ursula von der Leyen, the former German defense minister, who took on the new role last month. “But I said, ‘look, if we don’t get something, I’m going to have to take action’ and the action will be very high tariffs on their cars and on other things that come into our country.”

In another interview from Davos with Fox Business News, Trump offered a bit more detail, saying that, “Ultimately it will be very easy because if we can’t make a deal, we’ll have to put 25% tariffs on their cars.” 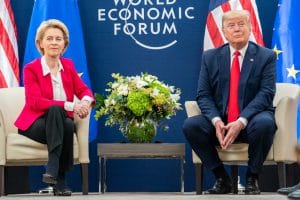 Auto imports have been in the crosshairs for the former New York real estate mogul since the earliest days of his campaign for the White House. With the exception of China, he has avoided actually putting in place any tariffs on cars from other markets since being sworn into office in January 2017. But the topic has remained front-and-center. During a 2018 meeting with French President Emmanuel Macron, it was widely reported at the time, Trump threatened to crack down “until no Mercedes models rolled on Fifth Avenue in New York.”

The latest threat came during the president’s first day in Davos where he was involved in a variety of controversies, including the harsh criticism he levelled at Doris Leuthard, president of the the Economic Forum’s host nation Switzerland for bringing up climate change.

Trump and his entourage attempted to keep the focus on economic issues, even as his impeachment trial in the U.S. Senate got underway.

The president tried to strike a positive note at times. He told CNBC that there were opportunities to work with British Prime Minister Boris Johnson who, having recently won re-election, is pushing forward on the United Kingdom’s withdrawal from the EU.

“Boris and I are friends, and he wants to make a deal, and that’s ok with me,” he said during the CNBC interview. 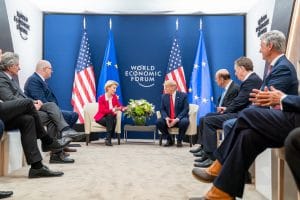 Trump and his advisers meet with European Commission executives at the World Economic Forum in Switzerland.

But it was obvious that not everything related to trade was going in a positive direction, despite Trump’s insistence that a “fair” deal is coming together.

“They know that I’m going to put tariffs on them if they don’t make a deal that’s a fair deal,” he told the Wall Street Journal.

It isn’t just cars that could be hit with new duties. The administration has been considering how to respond to a threatened French tax on digital service providers that could slam Silicon Valley. It has threatened to enact a 100% retaliatory tariff on everything from French champagne, wine and cheese to shoes and handbags. But Trump signaled an agreement with Macron to delay that new French tax until at least the end of 2020.

European officials didn’t immediately signal a response to the latest threat of a new tariff on EU automobiles. But they previously had threatened to take retaliatory steps against the United States.

As for the automakers who could be impacted by a 25% duty, they have largely tried to sit on the sidelines, out of the political spotlight. But BMW last week tried to inject a bit of data into the debate, noting that its largest plant in the world is located in Spartanburg, South Carolina. The factory also is the largest exporter of American-made vehicles but could be hit hard by any retaliatory tariffs the EU might impose.