The Jeep Gladiator walked away with North American Truck of the Year honors this year and it is not only winning honors for the Jeep brand, but also scoring big for Mopar.

Roughly, 90% of all Jeep Gladiators are ordered with Mopar accessories and customers are spending an average of $1,000 each to accessorize their vehicles, according to estimates from executives from Mopar, Fiat Chrysler’s aftermarket sales unit.

If anything, it is devoting more engineering and design office resources to developing accessories and performance parts that have been synonymous with Mopar since it was organized back in 1937, said Joe Dehner, head of Ram Exterior and Mopar Design.

Mopar doesn’t break out revenue figures for its major business units. But the demand for its products has steadily increased as customers – particularly younger customers – become more interested in personalizing their vehicles. 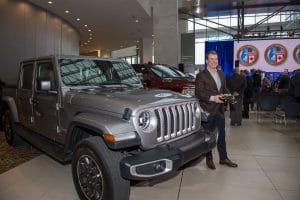 Ninety percent of all Jeep Gladiators come with Mopar parts, making its a top ambassador for the brand.

In fact, Mopar has set up a network of separate shops near the company’s assembly plants to accessorize vehicles as he come off the assembly line and before they are shipped to dealers.

“The Jeep Gladiator is not only the world’s most capable midsize pickup, it’s now the North American Truck of the Year as well,” said Jim Morrison, head of Jeep Brand – FCA North America.

“This honor is a testament to our customers who demand the very best and the Gladiator delivers with all of the 4×4 capability and versatility expected of a Jeep vehicles,” Morrison said.

NACTOY awards are considered independent and unique because instead of being given by a single publication, website, radio or television station, they are selected by a jury of automotive journalists representing diverse media outlets from the United States and Canada. 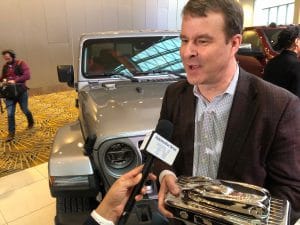 The Gladiator beat out the Dodge Ram 1500 HD and Ford Ranger.

Jurors evaluate the finalists based on segment leadership, innovation, design, safety, handling, driver satisfaction and value for the dollar. The process, which started in June 2019 by determining a list of eligible vehicles, includes three rounds of voting.

The Gladiator competed with the Dodge Ram 1500 HD and very popular Ford Ranger midsize truck to capture the 2020 Truck of the Year.