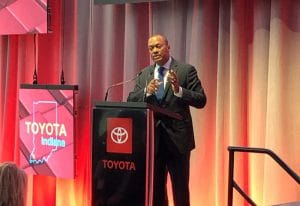 Toyota’s Chris Reynolds outlines the changes occurring at the company’s plant in Indiana.

Toyota revealed Friday it plans to shift production of its popular Tacoma midsize pickup to Mexico from the U.S. as part of a larger reallocation of resources during the next two years.

The passage of the new NAFTA allows automakers to build vehicles in Mexico without being penalized by substantial tariffs. Toyota plans to move the Tacoma from its plant in San Antonio, Texas, to a plant in Guanajuato, Mexico.

Toyota said the moves are designed to improve “operational speed, competitiveness and transformation at its North American vehicle assembly plants based on platforms and common architectures.” The new plant boasts a production capacity of 266,000 units annually while the company sold nearly 249,000 Tacomas last year, according to the company.

The automaker is in the midst of a $13 billion investment plan for its U.S. operations during a five-year period through 2021. To date, Toyota has committed approximately $7.1 billion of the announced total; cumulative direct investment in the U.S. exceeds $28.4 billion. 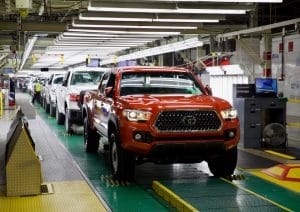 Toyota is shifting Tacoma production from its plant in San Antonio, Texas to a new site in Mexico.

In addition to moving the Tacoma, the Japanese automaker also plans to end production of its full-size Sequoia sport-utility in Indiana by 2022. The plant will focus on the brand’s midsize SUV and minivans: Highlander, Highlander Hybrid and the Toyota Sienna.

The company invested $1.3 billion at the Princeton, Indiana plant to make the changes and will add 550 new jobs at the site. Toyota will shift production of the Sequoia in 2022 to Texas and that plant will end production of the Tacoma by late 2021.

“Our $1.3 billion investment at TMMI is further proof that our Hoosier workforce is rededicated to producing safer, high-quality vehicles our customers love to drive.” 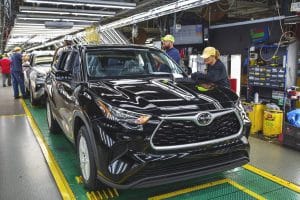 Toyota is moving production of its Sequoia large SUV to Texas.