Third-generation vehicles, like the upcoming Cadillac SUV, expected to cut times to 10 minutes. 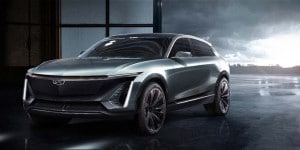 (This story has been updated to note that GM plans to increase charging speeds and range in steps as it rolls out its next-generation battery-cars.)

Conventional wisdom suggests there are three major obstacles to widespread adoption of battery-electric vehicles: cost, range and the lack of a public charging infrastructure.

But there’s another challenge: the time it takes to actually recharge an EV’s batteries compared to what it takes to fill up a gas tank. Charging at home, even with a 240-volt Level 2 charger can take all night, depending upon the size of a vehicle’s battery pack. And even with public quick chargers, some vehicles require an hour or more just to get to 80% of capacity – the normal point at which those high-power systems cut back to a trickle.

To become truly competitive, EV experts contend, charging a battery pack will have to be as easy – and as fast – as filling up a gas tank. And General Motors will come quite close to achieving that goal when it starts rolling out its BEV3, or third-generation battery-electric vehicle, platform this year, according to the automaker’s President Mark Reuss.

“We’ll be able to reach a 90% charge in just 10 minutes,” Reuss told TheDetroitBureau.com in an exclusive conversation, though it will likely reach for those numbers in stages as it closely monitors how its new models perform in real-world conditions.

While still officially just a target, reaching those numbers would be significant on several levels. First of all, the BEVs currently on the market, including models such as the Chevrolet Bolt EV, the Tesla Model 3 and Nissan Leaf, normally cut back sharply once they reach a 80% state-of-charge when using public fast chargers, or SOC.

Beyond that, they trickle up to higher levels. With the 2020 Bolt, for example, that would mean having only about 224 miles of usable range available, rather than the EPA-rated 259 miles. The long-range version of the Model S would have barely 300 miles out of its EPA-rated 373 miles. 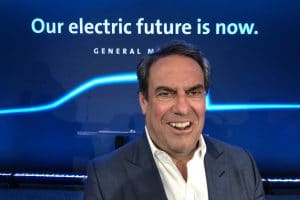 Reuss did not go into detail about which of the 20 or more battery-electric vehicles GM plans to bring to market by 2023 will be able to hit that SOC target in 10 minutes. It will almost certainly depend upon the size of the battery pack, suggested Sam Abuelsamid, principal auto analyst with Navigant Research. He believes that is likely the target for a Chevy Bolt-sized pack of around 60 kilowatt-hours. Larger packs will take longer to recharge.

Even so, that brings EV charging a lot more in line with what motorists now experience at the gas pump. And, in fact, charging could soon become simpler. Today, drivers have to swipe a credit card and, quite often, key in additional information before they even can begin to pump fuel. Going forward, most EVs will be able to digitally communicate with a public charger, instantly providing billing information.

How GM will achieve its quick-charge target, Reuss isn’t ready to reveal. What seems highly likely, according to Abuelsamid, is that the BEV3 architecture is migrating from today’s 400-volt electronics to an 800-volt system. 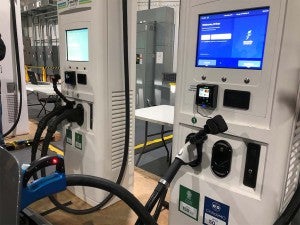 Electrify America said its newer chargers could be upgraded to provide faster charging times for vehicles with the 800-volt system.

That would be decidedly faster, but also more expensive, the analyst said, “but they need this” on at least some upcoming products. That notably would include the Cruise Origin, a boxy shuttle vehicle that GM’s Cruise LLC subsidiary unveiled earlier this month for its planned driverless ride-sharing service.

Some upcoming GM battery cars may stick with less expensive 400-volt systems, said Abuelsamid, but he also expects to see the faster technology be used for products with larger battery packs and, in particular, on BEVs coming from Cadillac, a brand whose buyers are likely to be less sensitive to the additional costs.

Significantly, the first new model GM plans to launch using the GM3 platform will be a Cadillac SUV set to debut this spring. It will be followed by the all-electric Hummer pickup – which is expected to have a large battery pack – and then the Cruise Origin.

Currently, the fastest public chargers available run at a maximum 800 volts and 350 kilowatts, though they adjust those levels depending on the vehicle being plugged in.

ChargePoint and Electrify America, two of the largest operators of public EV charging gear, have told TheDetroitBureau.com that their newest hardware could be upgraded to faster charging speeds if there’s demand in the future.

If GM can achieve its 90%/10-minute targets for BEV3 it would put itself in a potentially industry benchmark position, but don’t expect to see its new BEVs reach those extremes on Day 1. While the first vehicles to use the new electrical architecture should charge faster than the current Chevrolet Bolt and many other long-range models on the market, GM initially plans a cautious approach to make sure it isn’t pushing beyond what its new battery packs can handle. Everything has worked well in the lab, as well as during extensive prototype testing. And if that proves out  in real world conditions GM will be able to  both speed up charging and increase the post-quick charge SOC.

That’s not unlike what the automaker has done over the past decade, increasing battery utilization on both the Chevrolet Volt plug-in hybrid and the Bolt EV. One key difference is that BEV3 models will allow the use of over-the-air updates for models already on the road. Tesla has done much the same thing with its Models S, X and 3 in recent years, among other things, remotely improving their range.

Across the industry, automakers want to push the limits of high-speed charging. Porsche will become the first automaker to use an 800-volt system when its new Taycan sports car goes on sale this year. Audi, which introduced its first long-range model, the e-tron, in 2019, also plans to bump up from 400 to 800 volts in 2021 with the debut of its e-tron GT. That sports car will share its electrical architecture with the Porsche Taycan. 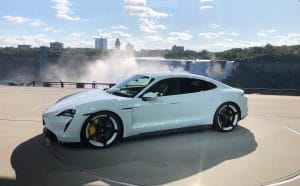 The Porsche Taycan also uses an 800-volt system, capable of charging to 90% quickly.

Other manufacturers are looking at a similar move. Ford, however, chose to stick with 400-volt technology for the Mustang Mach-E battery-SUV coming this autumn. An upgrade to 800-volt technology would have added too much cost, program executives explained.

Abuelsamid said he would not be surprised if Ford’s up-market Lincoln brand migrates to faster charging technology, however, since its buyers, like Cadillac’s, might be amenable to the time-versus-cost equation.

(Charging companies pairing up with banks, malls, fast food outlets to make it easy to plug in)

As electric vehicles get into higher production battery costs have begun falling sharply. Experts say the same may happen with 800-volt charging technology in the coming years.