Genesis GV80 Makes its American Debut, But it Won’t Be the Brand’s Only SUV for Long 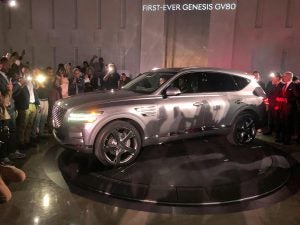 Genesis, the luxury brand spun off from Hyundai Motor Co., is finally set to fill the yawning gap in its line-up, the South Korean marque staging the official U.S. debut of the 2021 GV80, its first sport-utility vehicle, during a splashy event in Miami Beach.

With SUVs and CUVs now accounting for roughly two-thirds of American automotive sales, the GV80 is expected to quickly become the brand’s best-selling product line, officials said Tuesday night. They also confirmed that the midsize SUV won’t be alone for long. A second crossover, to be called the GV70, will follow it to market less than a year after dealers start delivering the bigger model this coming summer.

And a third utility vehicle is in the works, though it likely won’t be available until 2022, at the earliest, TheDetroitBureau.com learned. Though the name has not yet been determined, the additional offering will be the Genesis brand’s first all-electric vehicle.

“The GV80 starts a new journey for the Genesis brand,” proclaimed Mark Del Rosso, the marque’s U.S. CEO, as a pre-production prototype rolled out . With it, he said, Genesis can finally begin to achieve its market potential.

The name, Genesis, originally was used for the first true luxury sedan sold by Hyundai. Several years ago, the automaker decided to repurpose the name, using it for a standalone luxury brand. The original Genesis sedan became the new marque’s G80 sedan, the bigger Equus model rebadged the G90. For 2019, Genesis added a third sedan, the G70 which was last year named North American Car of the Year. 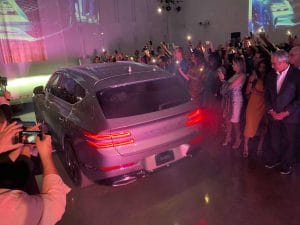 The GV80 is the Korean luxury brand’s first SUV.

But despite such a kudo, Genesis has struggled to make a real dent in the U.S. luxury car market. True, year-over-year sales rose 106% in 2019, but Del Rosso and other officials believe it’s only now, as the brand gets into the booming SUV market that it can really take off.

Tuesday’s event in Miami Beach was actually the Genesis GV80’s second debut, the SUV rolling out in Seoul two weeks ago. But company officials added a number of new details, including the fact that the American market will see the GV80 offered with two different powertrains:

·       Both engines will be paired with an eight-speed automatic; and

·       Both will be offered in either rear or all-wheel-drive configurations. 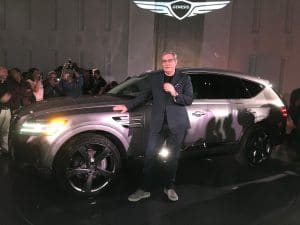 Specific power, performance and fuel economy details are expected to be released closer to the GV80’s on-sale date.

Genesis COO Erwin Raphael said he expects to see “virtually all” of the new SUVs sold in northern climes to have all-wheel-drive, while it will largely be rear-drive in the “smile states,” like Florida, Texas and California.

Visually, the GV80 picks up on many of the design cues recently seen with the launch of the latest-generation G80 sedan – with which it shares its underlying platform. That includes an oversize version of the brand’s “crest grille.” It’s framed by slit-like quad headlamps that also are set to become a Genesis styling cue. Twin character lines distinguish the body sides, with subtly flared wheel arches accenting the SUV’s power.

“We enjoyed the challenge of applying our ‘Athletic Elegance’ design language to an SUV architecture,” said Luc Donckerwolke, Chief Design Officer of the Hyundai Motor Group. “The precise proportions and attention to every detail denote that GV80 is authentic to Genesis design principles.”

Inside, the 2021 GV80 aims to show it can stand up to comparisons with the best European competitors, such as the Mercedes-Benz GLE. There are quilted leather seats and plenty of subtle details like machine-knurled knobs.

As is requisite in a luxury SUV, the Genesis GV80 features plenty of advanced technology. That includes a new take on active noise control that here can cancel out road, as well as engine and road noise.

The GV80 wasn’t intended to look like a bargain competitor to traditional products like the Mercedes GLE.

Those quilted seats can be ordered with what the Korean carmaker calls “active motion” technology. Each contains seven automatically adjusting air cells and, Genesis claims, can help reduce driving fatigue.

Genesis has been putting a premium on customer service in its bid to stand apart from what it derides as “old luxury.” Among other things, it will pick up a vehicle for service, dropping off a loaner until it’s ready.

Pricing is another number the automaker has yet to reveal. Del Rosso suggested the GV80 will be “priced competitively, but not aggressively,” to avoid any sense it is the bargain basement alternative to more familiar luxury competitors.

The GV80 should get a big public send-off this coming week as Genesis has bought a slot in Super Bowl LIV. It will feature celebrities John Legend and Chrissy Tiegen pitching the concept of “new luxury.”