This will be the most critical product Hyundai’s high-line spinoff has yet introduced. 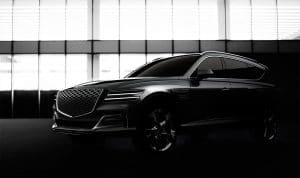 The new Genesis GV80 will debut in Korea this month, then reach U.S. dealers later this year.

This could be a make-it-or-break-it year for Genesis. The luxury spinoff of Hyundai has been struggling to carve out a niche for itself in the U.S. market and, while sales were up a bit in 2019, it remains a distant third-tier player despite the raves received for products like the BMW 3 Series challenger, the four-door G70.

Of course, it hasn’t helped that the Genesis line-up currently consists entirely of sedans in a market crazy for SUVs. The good news for the automaker is that it is finally set to reveal its first utility vehicle, Genesis giving us a hint of what’s in store with these three new teaser images.

“Over the last four years, Genesis established itself as a respected luxury brand with superior vehicle quality and a lineup of class-leading sedans with charismatic and discriminating style,” said William Lee, executive vice president and global head of the Genesis brand. “With the launch of GV80, Genesis will elevate expectations for excellence within the luxury SUV market.” 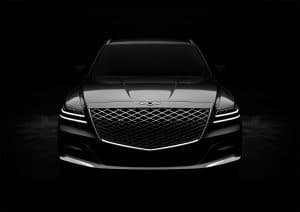 The GV80 picks up on key cues found on the latest G90 sedan, including the large Crest Grille.

As the name would suggest, the fourth model in the Genesis portfolio will be sized roughly equivalent to the mid-range G80 sedan. It’s underpinned by the unique rear-drive architecture developed specifically for the Genesis brand.

Recognizing reality, especially in northern climes, the GV80 also will be offered with optional all-wheel-drive.

The new utility vehicle picks up on now-familiar Genesis cues, starting with the latest iteration of the brand’s Crest Grille which was previewed on the recent G90 sedan makeover. The grille is surrounded by quad lamps. From a side view, the Genesis GV80 will pick up the marque’s Parabolic Line running front-to-back, as well as distinctive twin accent lines on the quarter panels. 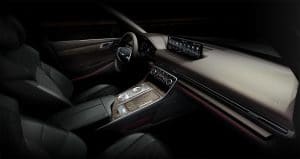 The interior gets a “minimalist architectural” look.

Inside, Genesis designers went for what they describe as a minimalist “architectural aesthetic.” There’s the requisite SUV high seating position, of course. Air vents stretch virtually the entire width of the instrument panel to accentuate the width of the cabin. Meanwhile, a new touchscreen system replaces most of the traditional knobs and buttons. The familiar shifter knob has been replaced by a rotary controller. The cabin appears well outfitted with traditional luxury elements, such as burlwood and metal accents.

Genesis offered no details about powertrain options though several alternatives are available if the brand plans to mirror what’s offered in the G80 sedan. That includes a 5.0-liter V-8 making 420 horsepower, as well as the twin-turbo 3.3-liter V-6, turning out 365 hp, offered in the G80 Sport. 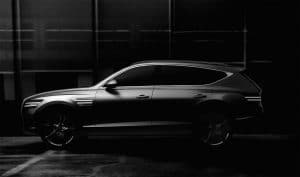 The GV80 platform is designed around rear-wheel-drive but the SUV will get optional AWD, as well.

We’d also anticipate features like terrain response control. Though unlikely to be sold as a serious off-roader, Genesis will, almost certainly, want to accentuate the capabilities of its first-ever SUV. Other things to expect: the broad suite of Genesis smart driver assistance technologies.

Meanwhile, expect to see at least one, and possibly two more, utility vehicles coming as the marque moves to flesh out its line-up and respond to current market demands. On top of those models, Genesis is working up plans for its first-ever battery-electric vehicle which, sources inside the company suggest, should be ready in less than three years.

The new Genesis GV80 will go on sale in the home South Korean market this month, the automaker promising the SUV will reach U.S. showrooms later this year.