A standout offering in an shrinking segment. 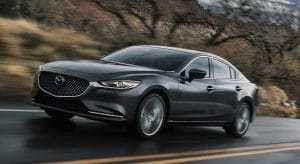 The 2020 Mazda6 is a standout offering in the ever-shrinking sedan market.

At a time when people have gone all in for sport-utility vehicles and pickup trucks, it’s easy for any four-door sedan to get lost on a dealer’s back lot.

The Mazda6 has an even steeper hill to climb than most sedans because it is tucked away in the portfolio of a Japanese brand with relatively small voice in the American market.

But Mazda has substantial skill and a big heart and the Mazda6 is a terrific automobile that is comfortable, fun to drive and comes with ample power and enough technology to keep pace with other, often more expensive midsized vehicles.

I drove the Mazda6 during what might be described as inclement weather and the handling on slick or wet pavement was most impressive and lived up to the company’s reputation for building cars with solid vehicle dynamics that translate into performance and safety on the road.

For example, the Mazda6 is equipped with electric power steering but it is quite responsive and allows the driver to feel the action of turning the wheel as needed. It also offers the driver the feedback needed to calculate his next move even as the car’s vectoring controls, another sophisticated feature that improves the vehicles dynamic performance, come into play. 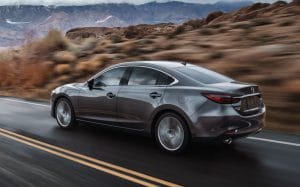 According to Mazda, as you turn in and throughout, the system works to adjust power delivery and shifting vehicle weight. The effect is subtle, but the system is designed to increase the driver’s confidence in the vehicle and reduce stress.

The Mazda6 also is equipped with four-wheel disc brakes with plenty of stopping power and the suspension is solid, nicely tuned and adjusts easily and quickly to different road conditions and surfaces.

In addition, the 2.5-liter “SkyActiv” turbocharged engine can generate 310 lb-ft of torque from just 2,000 rpm and up to 250 horsepower with 93 octane gasoline or 227 horsepower if you are running on 87 octane gasoline.

In addition, Mazda also builds its cars with fuel efficiency in mind and the SkyActiv engines are equipped with cylinder-deactivation technology is standard on Mazda6’s 2.5-liter engine, which shuts off its two outside cylinders in cruising conditions for even more efficiency. In the vehicle, I drove this translated in 23 miles per gallon in the city, 31 mpg out on the highway and 26 mpg combined.

The Skyactiv-Drive six-speed automatic transmission used on all versions Mazda6 includes a Sport Mode that recalibrates the gear ratios for more aggressive driving. Overall, the entire package seems designed to make sure the driver has some fun behind the wheel.

The Mazda6 on road performance isn’t the only thing that makes a good impression. 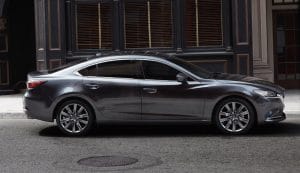 The new Mazda6 features the company’s Kodo exterior styling with room for five adults inside.

It looks handsome standing at curb or in the driveway and the car’s exterior has a fluid grace as well as an eye for detail that is evident in the construction of the Mazda grille and the way the lights are carefully tucked in the cars. The styled 19-inch wheels help accentuate the car’s overall appearance.

The cabin is nicely appointed – who doesn’t like a leather-wrapped steering wheel – and the seat in the Mazda6 Signature that I drove also was trimmed in Napa leather. Overall, the materials used throughout the interior, including wood pieces, conveyed a sense of luxury and refinement that aren’t always found in more expensive cars and utility vehicles. The noise abatement in the cabin isn’t perfect but it is more than adequate and enough, I found, to help reduce the stress during longer periods behind the wheel. The interior of the Mazda6 also feature LED ambient lights and unique stitching on the leather-wrapped steering wheel complete and moonroof.

Mazda also integrated an impressive amount of technology into the Mazda6.

The fully loaded Mazda6 Signature that I had a chance to drive came with a full array of features that consumers may have come to expect on more expensive luxury models. 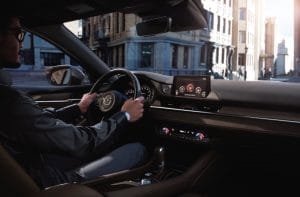 The interior of the new Mazda6 is laden with top quality leather and wood accents.

The top of the line Mazda6 Signature carries a manufacturer suggested retail price of more than $36,000 when the destination charge is added into the mix, which is still less than the than the average transaction price for a new vehicle in the U.S., which is now approaching $40,000.

But there were also features such as an 8.5-inch screen neatly tucked into the dashboard to allow for greater visibility and Bluetooth and audio pairing with two USB ports.

All in all, besides being fun the drive, the Mazda6 Signature is an impressive package that stands out even in today’s crowded market.