“Definitely not a car.”

San Francisco’s Cruise LLC may be ready to take a big lead in the development of autonomous vehicles, the start-up set to make a major announcement Tuesday expected to focus on a fully driverless vehicle.

Cruise, which has generated about $7.25 billion in funding since it was founded in 2013, hoped to launch an autonomous ride-sharing service last year, a move postponed for unexplained reasons. A fully driverless vehicle could help anchor such a service while also giving the company – which is majority controlled by General Motors – a significant cost advantage compared with existing ride-sharing services, such as Uber and Lyft.

Cruise has been working with modified versions of the Chevrolet Bolt EV but it appears it has something completely different set to debut at the Tuesday evening event in San Francisco. Sam Abuelsamid, principal automotive analyst with Cruise Automation, expects to see “a purpose-built vehicle … specifically designed for mobility services, more like a shuttle and better suited for high-volume applications.”

The new vehicle, he and others indicate, will share key components with the Chevy Bolt, including some of its underlying architecture, as well as the battery drive system that will power an array of all-electric products GM plans to bring to market during the next few years. 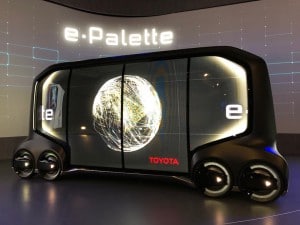 Toyota’s e-Palette electric vehicle will make its debut at the Tokyo Olympics in 2020. Could Cruise’s new vehicle be similar?

Significantly, while the vehicle was developed at the GM Technical Center in Warren, Michigan, it was a joint effort also involving Honda Motor Co. The Japanese automaker joined GM as a Cruise partner in 2018. Since then, San Francisco start-up has secured other significant investors including Japan’s SoftBank and T.Rowe Price.

Analyst Abuelsamid expects the autonomous vehicle to be assembled at GM’s Orion Assembly Plant in the Detroit suburbs. It is the same facility currently producing the Chevy Bolt. The Detroit automaker previously confirmed a large investment for the currently underutilized factory to allow it to produce additional battery-powered vehicles.

For its part, neither Cruise nor GM have responded to questions from TheDetroitBureau.com but Cruise spokesman Ray Wert told the Bloomberg news service that the product being unveiled Tuesday “is definitely not a car.”

If anything, several sources suggested it could have more in common with the ePallette concept vehicle developed by Toyota and scheduled to go into use in Tokyo during the upcoming Summer Olympics. That vehicle has been compared to a toaster on wheels.

As with the multifunctional ePallette, the Cruise concept may be flexible enough to serve a variety of applications, including both ride-sharing and cargo delivery.

GM is looking to make the Bolt its first fully autonomous vehicle. However, Cruise has put its plan to make the little EV the center of its plans.

(GM’s Cruise Unit Gets Additional $1.15B in New Funding)

Internet retail giant Amazon is believed to be working on a simple concept. It has invested in several autonomous vehicle start-ups, as well as Detroit-based Rivian, an electric vehicle manufacturer.

Meanwhile, Google spinoff Waymo is already field-testing autonomous vehicles as part of a ride-sharing service that launched in Phoenix in late 2018. But it currently is using what is known in the industry as “Level 3 autonomy,” requiring a back-up human “operator” capable of taking over in an emergency.

The Cruise vehicles would step up to Level 4 autonomy, meaning they could operate without any human involvement in “geo-fenced” areas and under reasonably good weather conditions. As such, one of the key details of the Cruise vehicle will be the complete lack of a steering wheel and other controls, sources indicated.

Eliminating the driver would substantially cut operating costs, translating into a lower price for customers. For Cruise, it would also mean a big leg up over ride-sharing competitors like Waymo, Lyft and Uber – all of them also hoping to eventually go driverless. 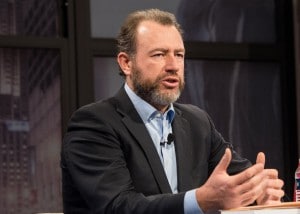 Some experts, meanwhile, believe that driverless ride-sharing services could eventually become so affordable as to convince many consumers to abandon their personal vehicles or, at the least, reduce the number of cars in a household.

One critical question remains: will Cruise be allowed to operate the new vehicles on public roads? GM applied to the National Highway Traffic Safety Administration in 2018 for a waiver allowing the operation of such a vehicle. NHTSA did not immediately respond, however, and CEO Mary Barra met with government officials late last year hoping to push them to move on the request.

So far, NHTSA has not authorized public testing. Separately, Congress has been struggling to come up with federal legislation covering autonomous vehicles. Leaders last fall indicated their hope of getting a law in place this year.