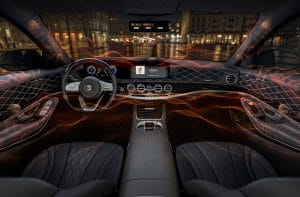 Continental and Sennheiser have combined to produce a speaker less auto system for vehicles.

Auto supplier Continental has teamed up with Sennheiser, a specialist in audio equipment, to develop a revolutionary speakerless audio system for piping entertainment into a vehicle’s interior.

The unique system, which they put on display at the Consumer Electronics Show, fills a vehicle’s cabin with immersive sound and by eliminating the need for speakers, it saves weight, which is at a premium in the auto industry now.

Instead of using conventional speakers, the system excites select surfaces in the vehicle’s interior to produce sound. Combined with Sennheiser’s AMBEO Mobility, the concept achieves 3D sound reproduction that envelops passengers in a soundscape that lets them enjoy their in-car entertainment. 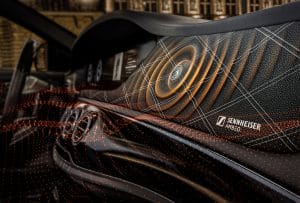 The new speakerless sound system works by exciting certain materials in the vehicle.

In comparison to conventional audio systems, Ac2ated Sound enables a reduction of weight and space of up to 90 percent. In this way, the system not only produces the highest audio quality but is also perfectly suited for electric vehicles, where saving space and weight is a high priority, Continental officials said.

“For Ac2ated Sound we have brought together the highest levels of expertise in the areas of acoustics, infotainment and vehicle design. In Sennheiser we have found an audio expert who helped us make our pioneering audio system even better,” said Helmut Matschi, member of the Executive Board and head of the business area Vehicle Networking and Information at Continental.

“Together, we have developed an audio system that creates premium sound out of nowhere. Additionally, Ac2ated Sound reduces space and weight. At Continental, we call this sustainability that’s music to your ears.”

(Land Rover doubles up to increase connectivity of new Defender)

Andreas Sennheiser, co-CEO of Sennheiser, said, “We are delighted to bring our audio expertise and AMBEO Mobility software into the pioneering Ac2ated Sound system from Continental, calibrating and fine-tuning the sound quality to deliver a completely immersive and natural sound experience that opens new audio perspectives and realities.”

The technology borrows from classical string instruments, which use their wooden body as a resonance chamber. In this case, the system uses specially developed actuators to excite specific surfaces in the vehicle’s interior. The result is an extremely natural sound experience for the occupants, who feel as if they are sitting in a concert hall surrounded by sound.

Compared with conventional speaker systems, the audio solution has a much lower weight and significantly reduced box volume.

With a multitude of components, conventional audio systems weigh up to 40 kilograms or more than 88 pounds. By using already existing surfaces, Ac2ated Sound is distinctly more efficient in saving space. It achieves a reduction between 75 and 90 % in contrast to existing conventional systems on the market.

The invisible audio technology gives vehicle designers and manufacturers the freedom to do more with an automobile’s interior, as they no longer need to account for large speaker faces taking up valuable space.

Instead, the surfaces in the vehicle vibrate just like speaker diaphragms. Actuators cause components such as the A-pillar trim, door trim, roof lining and rear shelf to vibrate so that they emit sound in different frequency ranges.