Chinese automaker lines up array of partners, including ViacomCBS. 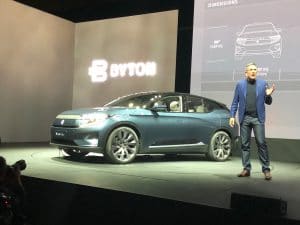 Byton CEO Dennis Kirchert says the Chinese EV maker will sell its M-Byte SUV in China first, then move to the U.S.

Exactly two years after it unveiled a concept version of its all-electric M-Byte battery-electric vehicle at the Consumer Electronics Show, Byton is back in Las Vegas to show off the production version of the SUV.

Prototypes are already rolling out of the automaker’s Nanjing assembly plant and sales are set to begin in the Chinese market later this year. Barring an escalation of the U.S.-Chinese trade war, potential buyers can look for the first M-Bytes to reach dealers in California during the second half of 2021, at a starting price of $45,000, CEO Daniel Kirchert told TheDetroitBureau.com during a conversation following Byton’s CES news conference.

The automaker had plenty of other news to announce, among other things revealing that it has signed up an assortment of content providers, including AccuWeather and ViacomCBS, who hope to “monetize” the M-Byte’s signature 48-inch videoscreen instrument panel – as well as separate screens for rear seat passengers. 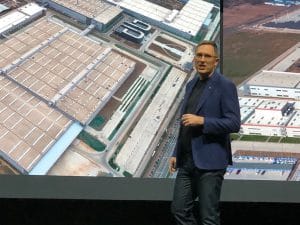 Kichert also revealed that the company is already in the early production stages at its plant in China.

While Byton hopes to catch the growing wave of interest in battery-electric cars, it wants to distinguish itself by providing a “platform for life,” a catchphrase that translates into a high-tech vehicle that can seamlessly integrate all the features and functions of a smartphone and home infotainment system.

“Cars are becoming more about data power than horsepower,” said Andreas Schaaf, during an hourlong CES presentation, adding that the M-Byte is meant to be “much more than a car that takes you from Point A to B. It is a smart device on wheels.”

The digital instrument panel will, of course, allow a motorist to toy with a reconfigurable gauge cluster. But it can also display e-mails, weather, traffic, play ultra-high definition movies and even let the driver participate in video conference calls – at least in accordance with government regulations in the U.S., said Kirchert. In the U.S., many of those functions would be blocked out unless the vehicle was in Park, he explained.

For a partner like ViacomCBS, the tie-up with Byton opens plenty of opportunities, albeit “in stages,” added Ted Schilowitz, a futurist with the media company’s Paramount Pictures subsidiary. “It’s not the here and now. It’s where it goes in the future when autonomous driving comes along.” 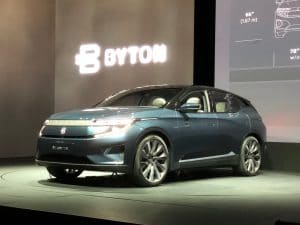 The Byton M-Byte will come with two battery options giving it 224 miles of range or 270 miles.

When Byton first showed the concept version of the M-Byte at CES 2018, it said it planned to have the battery-electric SUV capable of hands-free driving. The race to autonomous technology is proving slower than proponents had originally anticipated, however, and it is unclear when a self-driving version of the electric vehicle will be available.

Byton hopes to have some semi-autonomous capabilities available soon after launch and, with the SUV capable of smartphone-style over-the-air updates, the company says it will add new features as they become ready – much as BEV rival Tesla has been doing.

The California automaker is a clear role model for Byton, CEO Kirchert praising Tesla on several occasions during his presentation and subsequent interview. Among other things, Byton will copy the U.S. automaker’s secondary business, adding both commercial and residential backup battery systems to its line-up.

Kirchert said he also has revised his business model based on Tesla’s growing sales. Originally, he expected China to generate fully half of Byton’s global demand. He now thinks the U.S. and Europe will each roughly match Chinese sales. The start-up revealed it now has 21,000 advance reservations for the M-Byte in Europe, 61,000 worldwide.

(Byton M-Byte’s Videoscreen Will Be as Large as 7 iPads; Following Different Model)

An upbeat Kirchert told TheDetroitBureau.com he was increasingly positive about EVs considering, “2019 marked a downright breakthrough in the electric vehicle market.” 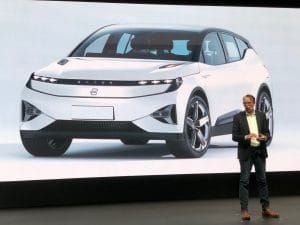 Byton VP Benoit Jacob talks about the company’s second vehicle, the K-Byte, which is still in development.

Byton plans to create what the CEO called a “hybrid” sales model. To comply with various state laws, it will set up franchised dealers – Kirchert hinting it is negotiating a deal with a “major” auto group with a nationwide presence. But it wants to handle as much of the preliminary sales process as possible online using its own website and smartphone app.

U.S. sales will start in California, far and away the country’s largest EV market. But Byton will then start to roll into other states and regions, especially the East Coast, as battery-car demand grows.

The production version of the M-Byte revealed in Las Vegas has changed only slightly from the original concept, most of the tweaks done to improve aerodynamics – which will translate into better range. Buyers will have the option of choosing between 72 and 95 kilowatt-hour battery packs, range running from 224 to 270 miles, at least based on the relatively lenient European test standards.

The base model will feature a single, 200 kilowatt, or 270 hp, electric motor on the rear axle. The all-wheel-drive version will get a second motor up front for a combined 300 kW, or 400 hp.

According to Kirchert – who previously worked on electric vehicles at BMW – a midrange M-Byte should come in at $55,000 in the U.S., with a fully loaded version of the electric SUV topping out at around $70,000. 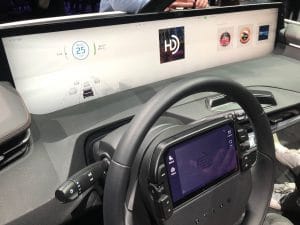 The M-Byte will still feature a 48-inch video screen. In fact, that kind of space has attracted the attention of ViacomCBS and other possible partners.

For now, all versions of the M-Byte will be produced in Nanjing, but the CEO said Byton has negotiated a deal with a South Korean partner that will likely start assembling knock-down kits in that country, as well. One benefit, according to Kirchert, is that this would help Byton sidestep potential trade wars, such as the ongoing dispute between the U.S. and China.

Beyond that, he added that “If volume tops 100,000 (in any individual market, such as the U.S. or EU), we will explore local production.”

Byton isn’t counting on the M-Byte alone to drive demand, however. The automaker has also shown off a concept version of a second product, the K-Byte. It expects to put that midsize BEV into production about 18 months after the launch of the M-Byte.