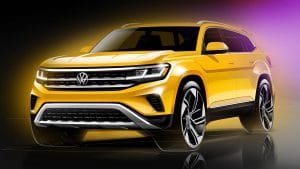 Think of it as “déjà vu all over again,” as baseball legend Yogi Berra was fond of saying.

If these renderings of the 2021 Volkswagen Atlas ring a bell, that should be no surprise. The updated, three-row version of VW’s big SUV will pick up some of the key design cues first seen earlier this year when the more coupe-like, two-row Atlas Cross Sport made its debut, while also growing a bit longer.

The German automaker, to no one’s surprise, is rapidly expanding its line-up of SUVs. The launch of the Atlas Sport for 2020, along with the update of the 3-row Atlas, marks just the beginning. The automaker also confirmed during a Detroit event that it also is preparing to bring out another model in 2021 that will slot below its current base crossover, the Tiguan. And there’s also the brand’s first long-range all-electric model coming, itself in SUV form.

As for the 2021 Atlas, it will get a major facelift compared to the current model, adopting many of the basic cues first seen with the Atlas Cross Sport. That starts with a revised grille – with the new VW logo unveiled at the recent Frankfurt Motor Show. The grille now flows into the headlamps which are framed by hockey stick-shaped LED running lights. 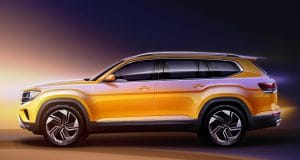 The 2021 Atlas retains its boxy shape but adds a bit more sculpting to its side panels.

The body itself retains the squarer shape of the original Atlas, rather than adopting the coupe-like roofline of the Sport. That’s essential for a three-row CUV. But the bigger model does adopt the more sculpted details of the two-row offering, as well.

Perhaps the biggest surprise is the fact that the 2021 Volkswagen Atlas adds a full three inches in length compared to the outgoing version. That’s not something you normally expect in a mid-cycle update but it reflects the German automaker’s need to meet new European pedestrian protection rules. Since the changes are meant to soften the blow of an impact, they have no impact on interior dimensions which remain the same on the 2021 model.

The update should make it easier to distinguish Atlas and Atlas Cross Sport at a glance, however, the three-row model now measuring 5.7 inches longer with the 2021 changes.

As before, Atlas will be offered with a mix of powertrains, including the previous versions four- and six-cylinder packages. But the 2021 update means both now will be available with optional all-wheel-drive, rather than just the V-6 version. 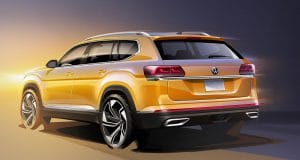 Both the V-6 and I-4 powertrains will be offered with optional AWD for 2021.

As was widely expected, the 2021 model picks up on some of the driver assistance technologies added to the Atlas Cross Sport. That includes Traffic Jam Assist which takes the current adaptive cruise control system up a notch, not only matching the speed of the car ahead and holding your place in your lane but also bringing you to a complete stop, if necessary. The SUV will start up again if traffic starts moving within three seconds. Otherwise, you just need to gently tap the throttle. The system also can read, display and respond to road signs.

The 2021 Atlas also will add Dynamic Road Sign Detection that can read speed limit and other signs on the fly, rather than just relying on potentially information stored in the navigation system.

When we spoke to Volkswagen Group of America CEO Scott Keogh a couple months back he indicated the brand’s crossover line-up would be growing and we’re starting to hear more about what’s in store.

That will include, of course, the all-electric ID.4 crossover scheduled to debut next year and become the first Volkswagen long-range all-electric model targeted at the U.S. market. It initially will be imported but, in a couple years, will go into production at VW’s Chattanooga plant – which is currently undergoing an $800 million expansion to handle production of two new battery-electric vehicles. The second model is also expected to adopt an SUV form, though details have yet to be released.

(Volkswagen Concept IDs a Space Vizzion of the future)

Yet another gas-powered SUV, meanwhile, is in the works, targeting a fast-growing entry segment below VW’s current U.S. base crossover model, the Tiguan. Targeting the likes of the Jeep Compass and Nissan Rogue Sport, look for it to be produced at the automaker’s big Mexican assembly plant and reach American showrooms sometime next summer.