Union's board will fill Gamble's old VP spot in January.

Rory Gamble was appointed UAW president by the union’s executive board.

Former UAW Vice President Rory Gamble was named president of the union, succeeding Gary Jones, who resigned in the wake of an ongoing federal investigation into financial mismanagement within the organization.

Gamble will retain the spot until 2022. Prior to being named to the top spot by the UAW’s Executive Board, he oversaw the union’s Ford Department, and took over as acting president after Jones took a leave of absence in November.

The board will fill Gamble’s Vice President vacancy in January.

“This is an honor to complete my career and serve the members of this great union in this capacity,” said Gamble.

Former UAW President Gary Jones resigned after being implicated in the wrongdoing by several union executives.

“This wasn’t planned, and it is a tall order. There are difficult decisions that will need to be made in the coming months for our members. But I promise one thing, when I retire and turn over this office, we will deliver a clean union on solid footing.”

Gamble, 64, spent 12 years as Director of Region 1A before being elected Vice President and appointed to head the Ford Department in 2018.

He’s spent much of his tenure as acting president attempting to clean up the mess left by his predecessors, Jones and Dennis Williams, who was president before Jones. The two have been implicated in cases against other union executives by federal prosecutors.

In fact, the Gamble’s appointment comes just a day after former VP Joe Ashton pleaded guilty in of money laundering and wire fraud. Ashton, who previously served on General Motors’ board of directors, faces up to 37 months in prison and a $250,000 fine.

Gamble has been working to restore the faith of the rank-and-file members by enacting a series of ethics reforms, including appointing an outside Chief Ethics Office; an internal ombudsman; policy changes; a clawback provision to recover misspent money; new financial controls including auditing and identifying and implementing stronger financial management practices.

“Together, our members, local leaders and our Board have an opportunity to set the UAW on a course for generations,” Gamble said in a statement. 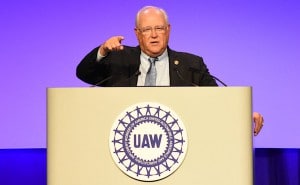 Former UAW President Dennis Williams told members that new safeguards will prevent future attempts to steal from training funds. Ultimately it was too little too late.

“There are many opportunities through new technology; new jobs; new organizing drives and collective bargaining gains to lift up our families, our communities and the middle class. We are in this together as we work through these changes and challenges.”

The UAW also has taken exception to comments from Matthew Schneider, the U.S. attorney for the Eastern District of Michigan, suggesting the union might need federal supervision of the effort to rid the union of corruption, despite its efforts at internal clean up.

“It’s disappointing that Mr. Schneider does not yet recognize the UAW’s sincere efforts at reform. After just three short weeks under Rory Gamble, the UAW has instituted a series of fundamental reforms. In fact, today the UAW announced significant accounting changes and financial controls that will tighten up our procedures and prevent future misfeasance,” the union statement said.

The UAW noted, as recently as last week, it expressed a willingness to further work with the government on the issues of concern. And we continue to cooperate in providing the government any and all records requested.