Rinspeed’s MetroSnap Concept is Weird Enough it Might Work 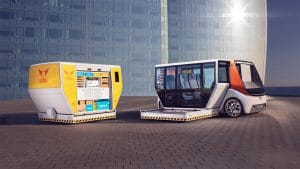 Rinspeed plans to show off its updated Snap concept, now named MetroSnap, at CES next month.

It’s frequently said that the shift to battery power will free up automotive designers and engineers to do things impossible when you have a big internal combustion engine gobbling up space.

We’ve seen some creative ideas of what that might mean during the last several years, as well as some downright weird ones. The latter includes the Toyota e-Palette, which looks like a toaster on wheels, along with the Snap concept from Rinspeed, both of which were unveiled at the Consumer Electronics Show in Las Vegas.

Rinspeed, which has a history of showing off extreme design concepts, is bringing a version of its box-on-wheels back to the 2020 CES next month and, the Swiss company claims, the updated version, renamed MetroSnap, could provide a solid base for a future production model.

The original Snap, which debuted at the annual electronics show in January 2018, consisted of a skateboard-like platform – similar to what we’re seeing manufacturers use across the industry with their latest-generation battery-electric vehicles. The traditional engine compartment goes away, and the batteries, motors and key electronics slip into or underneath the load floor. The unique concept behind the original Snap was that an owner or operator could, quite literally, snap different bodies on and off the platform, when and as needed. 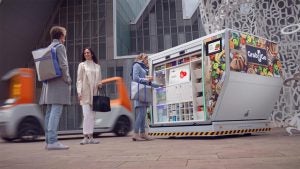 Rinspeed believes its MetroSnap concept could be the basis for a production vehicle.

“(The) pod can even be useful when stationary,” Rinspeed said at the time. “It can be anything from a variable shopping pod or a spacious camping pod to a cozy cuddling pod and even provide a breathtaking, fully connected user experience for the occupants of the passenger cabin. The sky is here the limit for the possible applications.”

An update, dubbed MicroSnap, showed up at CES a year later. It was smaller, targeting dense urban environs. It also adapted autonomous drive capabilities that could allow a pod to be dropped off somewhere, the electrified skateboard then heading off to another location – perhaps a central depot where it could pick up a new pod.

The latest take, the MetroSnap, shows this is a work in process, but one in which Rinspeed claims to have solved some of the problems with earlier versions of the Snap concept.

“People desire ever more convenience and simplicity in their lives, and we want to make this possible with our innovative transport solutions,” explains Rinspeed chief Frank M. Rinderknecht.

One possible use for the MetroSnap would be to move pods that would be used as mobile retail operations, or the food trucks popping up in ever-increasing numbers around the country. The business end, the pods, could be dropped off while the underlying skateboard would keep busy running other errands during the day. 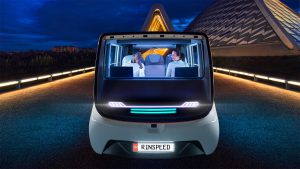 MetroSnap could be used for a variety of functions while stationary, Rinspeed says.

The pods, incidentally, would have their own battery units to provide energy out in the field once disconnected from the underlying platform.

For his part, Rinderknecht claims, “The crucial step towards series production has now been taken.”

Though an advance release on MetroSnap gives no indication there are, in fact, specific production plans, the project has a lot of big name partners, from Ernst & Young to Osram, which suggests there is some real interest in turning this concept into a reality.