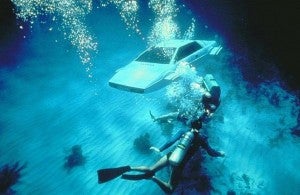 Tesla CEO Elon Musk bought one of the more creative Bond cars, the Lotus Esprit transformed instantly into a submarine, for about $1 million.

Turns out that Elon Musk is quite the movie buff … and he likes action films.

Musk recently unveiled Tesla’s newest vehicle, Cybertruck. The truck features some polarizing exterior styling. The truck, which could be described as wedge shaped, met with a chorus of negative comments about its look.

However, fans of the truck responded by placing about 250,000 pre-orders for the unique-looking vehicle. To pre-order, potential buyers need only pony up $100, which is refundable if they decide later to not buy the vehicle.

While there were plenty of mock ups of what people thought the truck would look like before the debut, Musk had consistently said it would be unlike any truck produced before, and specifically referenced the vehicle in Blade Runner. 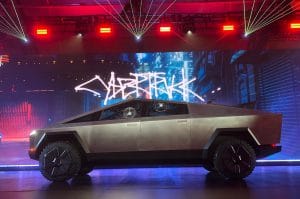 Tesla’s new Cybertruck lived up to Elon Musk’s description: it’s unlike anything else in its segment.

And the comparison is certainly an apt one. However, it’s recently come to light that it wasn’t the only movie vehicle that impacted the design of Cybertruck and it might be argued that this other vehicle’s impact was 1 million times stronger than Blade Runner.

A white version of the that vehicle helped James Bond get the bad guys in 1977’s “The Spy Who Loved Me.” For those unfamiliar, Bond drives the Lotus into a lake where it “converts” into a submarine, complete with rocket launchers. After taking care of business at in the water, Bond drives it out of the lake none the worse for wear, and apparently into the consciousness of a young Elon Musk.

Tesla’s CEO recently said it also served as design inspiration for Cybertruck; however, Musk actually owns this vehicle, paying just a little under $1 million for it at a RM Sotheby’s auction in 2013. “Wet Nellie” as it became to be known, was one of eight versions of that vehicle that appeared in the movie.

However, that version, which was really more working submarine that functional road car, was stuffed into a storage unit and forgotten about until a New York couple purchased the now unclaimed storage unit for just $100. 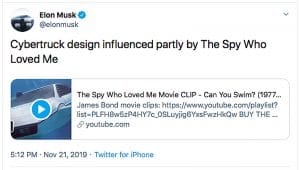 Tucked under a blanket was Wet Nellie. Excited, the couple had planned to refurbish the vehicle … largely because they were not James Bond fans and had no idea what they had purchased — and its potential value. That changed when the driver from the trucking company they hired to haul the vehicle out of the unit called to tell them what they had actually purchased.

After getting the vehicle authenticated by the Ian Fleming Foundation, they elected to restore it to its movie glory and put it on display before putting it up for sale. The sale clearly went well.

However, potential Cybertruck owners should be grateful that it wasn’t drawn to “The Man with The Golden Gun,” in which Bond drives a fire-engine red AMC Hornet around Jamaica.